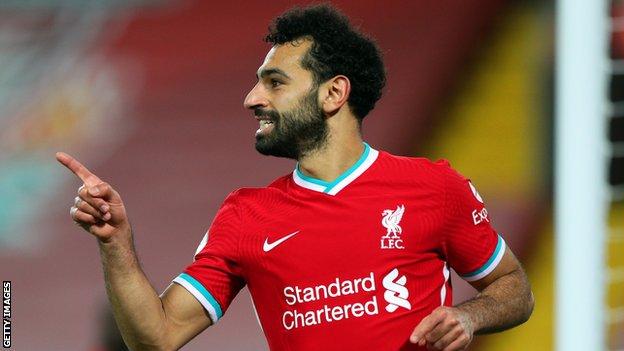 Salah joined Liverpool from Roma in 2017

Liverpool boss Jurgen Klopp has spoken to forward Mohamed Salah about his conduct after he returned two positive tests for coronavirus while on international duty with Egypt.

The 28-year-old was reportedly seen dancing at his brother's wedding.

Salah, who is self-isolating, will miss Sunday's game against league leaders Leicester and is likely to miss the Champions League tie against Atalanta.

Klopp said Salah was back on Friday and the pair's relationship was "fine".

The German added: "He is in a good place. He feels well.

"There is nothing to say in public about all the things I talk to my players about but I can say in the summer I was in Germany and a friend moved his birthday party because I was there.

"There were 50 people attending. I decided at the last minute not to go and it was allowed in Germany. It was outside but I did not go.

"In other countries there is more social pressure on you and a brother's wedding is a very special moment. What I can say is that my players are all incredibly disciplined. There were some cases but they all know about the situation.

"But sometimes it doesn't work out like this and something happens, and we are in the situation we are in, but all the rest is between me and Mo, and we did that already so we are fine."

Salah has scored 10 goals in 13 games in all competitions this season.