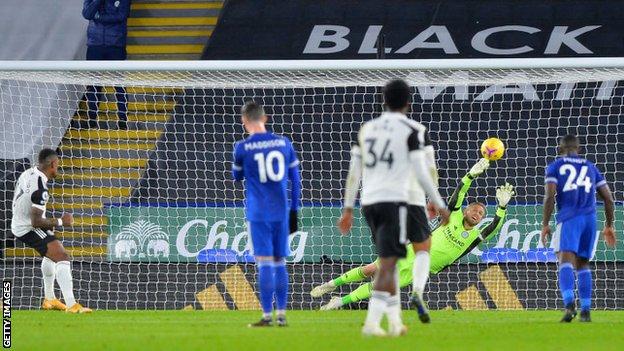 Fulham had missed five of their past eight Premier League penalties, each miss coming from a different player

Parker's side had missed three penalties in a row before Cavaleiro converted to help secure victory at Leicester, who missed the chance to go level on points with leaders Tottenham.

The Portuguese had been one of the spot-kick culprits - missing in a 3-2 home defeat by Everton eight days earlier - and Parker was impressed with the way he stepped up.

Aleksandar Mitrovic had hit the bar with a penalty at Sheffield United in October, and Ademola Lookman had been widely criticised for a failed attempt at a Panenka-style spot-kick in the defeat by West Ham on 7 November.

"Lookman came under a lot of stick when he did the penalty and he needed to take his medicine," Parker said.

"Cavaleiro slipped last week and I'm not on Twitter or Instagram but I can only imagine what was being said, the jokes at his expense.

"I said to him: 'Are you ready to take one if we get it?' He looked at me dead in the eye and said: 'I'm ready.' It's the courage to step up there are the things we need."

Lookman scored Fulham's opener, slotting past Kasper Schmeichel following Andre-Frank Zambo Anguissa's driving run from inside his own half.

Cavaleiro stepped up to make it 2-0 before half-time, after referee Simon Hooper reviewed Christian Fuchs' tackle on Bobby Decordova-Reid on the pitchside monitor.

Leicester had earlier struck the woodwork twice in quick succession as Wesley Fofana's follow-up to Youri Tielemans' volley cannoned off the crossbar.

But the Foxes, as they did in their 3-0 defeat by Liverpool, endured another frustrating night in attack until substitute Harvey Barnes' late reply ensured a nervy finale for Fulham.

"Ade earned the right to score his goal and Cav put himself up to be scrutinised," Parker said. "There's no denying there's relief.

"We're in a world where it's win or lose for all of us and that's the big picture. I've spoken to them about not letting defeats cripple us."

Fulham's second win of the season takes them up two places to 17th, while Leicester remain fourth and three points behind leaders Tottenham.

RB Leipzig loanee Lookman celebrated his goal by holding up a Senegal shirt which had been hung in the visitors' dressing room, in tribute to former midfielder Papa Bouba Diop, who died aged 42 on Sunday.

Fulham show they are up for the fight

A match at the King Power Stadium marked the start of a difficult run of fixtures for Parker's side, with a trip to Manchester City and the visit of Liverpool to come. They meet five of the 'big six' in their next nine games.

Fulham arrived at Leicester on the back of successive defeats, with the league's joint-worst defensive record and only one win in 25 Premier League away matches.

But Parker called for greater intensity after his side let in three goals in their defeat by Everton - the fourth time they had conceded three or more in nine league games - and how his call was answered here.

The visitors appeared focused and well-organised from the off, while the return of Anguissa brought calm in midfield.

Anguissa's positive play and neat through-ball teed up Lookman's well-taken opener, while the mazy runs of the England youth international caused Leicester problems on the break throughout.

Cavaleiro's coolness from the spot, following his unfortunate slip in his previous miss, perhaps best typified a transformed Fulham display.

The visitors took a much more defensive approach in the second half in an attempt to keep Leicester at bay but, after Lookman was denied by Schmeichel at close range with 15 minutes remaining, Parker's men successfully endured a late barrage to leave with an excellent three points.

Brighton's injury-time equaliser against Liverpool and Tottenham's goalless draw with Chelsea over the weekend gave Leicester the chance to keep pace at the top and put a disappointing display at Anfield behind them.

However, a late flurry was not enough to undo the damage of an uninspiring first-half performance.

Rodgers' side had to wait until the 19th minute for their first attempts at goal, but Fofana lacked composure after he was fastest to react to Tielemans' sweetly hit volley from the edge of the penalty area.

Starved of supply against Liverpool, last season's Golden Boot winner Jamie Vardy struggled again against the Londoners, touching the ball only once in the first 25 minutes at the King Power Stadium.

Vardy, whose last-gasp equaliser against Braga on Thursday ensured qualification for the Europa League last 32 with two games to spare, produced a clever flick from Dennis Praet's cross to draw Alphonse Areola into action, but it was a rare opportunity for the hosts.

After Vardy's header set up Barnes, substitute Kelechi Iheanacho twice had a shot blocked in a desperate final push for an equaliser - but it is now successive league defeats for the Foxes.