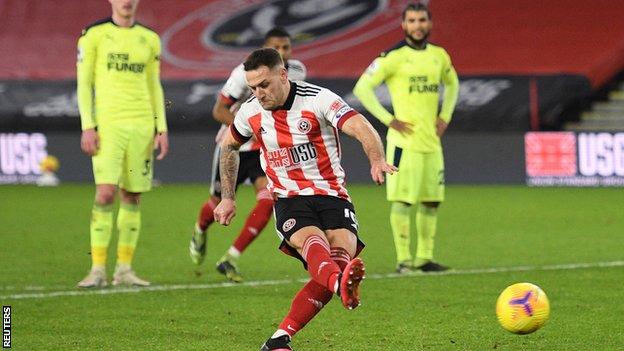 Sheffield United finally gained their first Premier League win of the season in their 18th game as they beat 10-man Newcastle United at Bramall Lane.

Newcastle's Ryan Fraser was sent off late on in the first half after he picked up two bookings in a three-minute spell following fouls on John Fleck and David McGoldrick.

With a little over 15 minutes remaining the Blades were awarded a penalty when Federico Fernandez handled the ball, with the decision given after referee Andy Madley checked the incident on a video screen.

Substitute Billy Sharp sent goalkeeper Karl Darlow the wrong way from the spot for what proved the only goal of the game.

Rhian Brewster nearly added a second for the hosts late on but his deflected strike from 20 yards hit the foot of the post.

The victory ended a club record run of 20 league matches without a win since the Blades beat Chelsea 3-0 on 11 July, before ending the 2019-20 season with three successive defeats.

Their start to this campaign - no wins, two draws and 15 losses - was the worst in Premier League history.

The Blades remain bottom of the table but are now on five points, three behind 19th-placed West Brom and nine adrift of Brighton in 17th, having played a game more than both.

Meanwhile, Newcastle, who have now gone eight games without a win in all competitions, remain 15th, eight points clear of the relegation zone.

The Blades, who only named seven out of a maximum nine permitted substitutes, were the better side in the first half, but, as so often this season, struggled to make that count.

John Lundstram twice shot wide when well placed, David McGoldrick had an effort saved by Darlow and headed another chance over, and Jayden Bogle was also denied by Darlow.

Sharp, introduced from the bench just before the hour, helped earn the penalty he converted, trying to run past Newcastle captain Fernandez, who flicked the ball away with his left hand.

Referee Madley had originally missed the handball, but after a video assistant referee check, he watched it again on a pitchside monitor, Sharp stepping up for his 100th league goal for the Blades.

He added: "The referee got it spot on in real time. It hit [Fernandez's] hand but it's not intentional. It could have been a foul on him as well.

"VAR is supposed to be for clear and obvious decisions. How someone 300 miles away on a TV screen can overturn it is beyond me.

"You know when the referee goes to the screen it will be a penalty - it's pathetic. It's beyond me."

Brewster nearly added a second late on, but there was also time for an anxious moment for Chris Wilder's side in the fifth minute of stoppage time.

A mix-up between Bogle and home goalkeeper Aaron Ramsdale saw the ball heading towards goal, before Ramsdale recovered to claw the ball away for a corner.

Wilder will be hoping his side can take confidence from this victory, especially as they now play three of the Premier League's top five - Tottenham, Manchester United and Manchester City - in their next three league games.

For Newcastle it has been a rotten month since they beat West Brom 2-1 on 12 December.

Since then they have only picked up two points from six Premier League matches and gone out of both the FA Cup and the EFL Cup, beaten in the latter by Championship side Brentford at the quarter-final stage.

Bruce picked a defensive side for the trip to Sheffield and saw them fail to manage a shot on target in the opening 45 minutes.

Their only opportunity of note fell to returning England striker Callum Wilson, who headed over from six yards out after a fine first-time cross from the right flank by Fernandez.

But after Fraser picked up two yellow cards inside a three-minute spell, fouling John Fleck and then McGoldrick needlessly out on the left touchline, Wilson was left isolated up front as Newcastle defended deep in a bid to hold on to a point.

Once behind, they brought on Andy Carroll and had a chance to score an injury-time equaliser but Jacob Murphy could only fire a free-kick straight at Ramsdale.

Bruce was also angry that a challenge from Sharp on Fabian Schar was only punished with a yellow card.

"There's a horror challenge by Billy Sharp that should be a straight red card. It's blatant," added Bruce. "They didn't check it. It's laughable the whole VAR situation and I don't think anyone enjoys it.

"I'm struggling to cope with it. Week in week out, it's ruining the game."