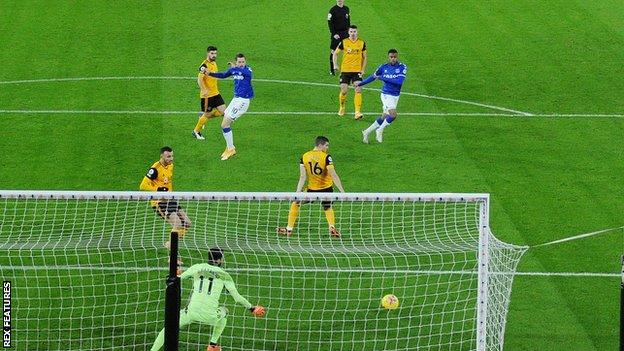 Everton maintained their challenge for a Champions League spot with victory at Wolves thanks to Michael Keane's 77th-minute winner.

The Toffees' sixth away win in the league this season lifted them to fourth in the table, level on points with third-place Leicester and only four off the lead held by Manchester United.

They got off to a brilliant start when Alex Iwobi fired home in the fifth minute for his first goal in 38 Premier League appearances.

Wolves, seeking only their second win in eight games, hit back in the 14th minute through Ruben Neves. The Portuguese midfielder ended his own barren run against Brighton at the start of January, and made it two goals in two league matches with a sublime sidefoot finish following brilliant movement from Rayan Ait-Nouri.

The home side looked more likely to edge the contest until Keane rose highest in the area to convert Andre Gomes' teasing cross from the left.

There were tweets of surprise on social media when Everton boss Carlo Ancelotti named a starting XI without a recognised striker. Leading scorer Dominic Calvert-Lewin was unavailable because of a hamstring problem, while the Italian opted to leave Cenk Tosun on the bench.

Gylfi Sigurdsson was billed as the player to lead the line, but the Toffee that looked most potent was winger Iwobi. His link-up play with his fellow attackers was key to many of the visiting side's best moves and he deserved to end his goalscoring drought.

The attack began when James Rodriguez floated the ball to Lucas Digne on the left of the area. The French full-back, making his first league start since 22 November, played a first-time pass to Iwobi, whose cleanly-struck effort took a slight deflection off Conor Coady.

The Nigeria international also forced a good low save from Rui Patricio following a swift one-two with Rodriguez.

Ancelotti's men looked short of ideas in attack after the break but made it count 13 minutes from time when Keane put away the only effort on target in the second half. It was the defender's fourth goal of the season.

Striker or no striker, Ancelotti has got that winning feeling again and his expensively-assembled squad are back on course following their slump in November. 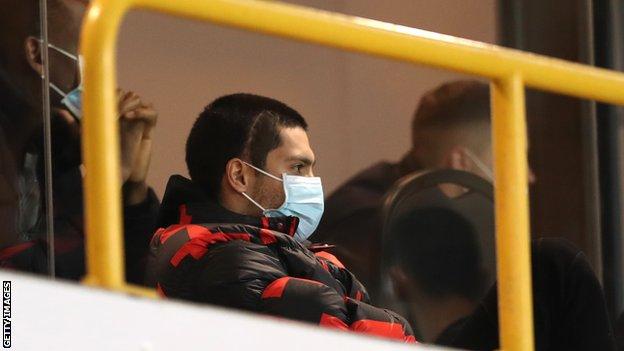 The large scar from his surgery was visible as Raul Jimenez watched his side from the stands at Molineux - how different might Wolves' campaign have looked so far had their talisman in attack not suffered a fractured skull against Arsenal in November.

Nuno Espirito Santo's side won that day at Emirates Stadium, but have picked up only the one other victory in the league in the eight games since. The Midlands club have fallen from seventh to 14th in the table.

They have clearly missed the natural finisher during this period, but the build-up play has rarely been found wanting.

Against Everton the likes of Pedro Neto and Neves dictated play beautifully in the opposition third, while 19-year-old Ait-Nouri was exceptional as an attacking left-back. The way in which he drove past Abdoulaye Doucoure on the wing to set up the goal was dazzling. What was lacking was bite, because aside from Neves' late free-kick, which hit the bar, Everton keeper Jordan Pickford was untroubled in the second half.

Keeping a clean sheet has also been Wolves' problem - the last time they kept a score to nil in the league was 12 games ago. The defenders should have done better to close down Iwobi while they made it too easy for Keane to get his head to the ball.

Nuno says he is very concerned about the situation, but it is unlikely his side will be caught up in a relegation battle.