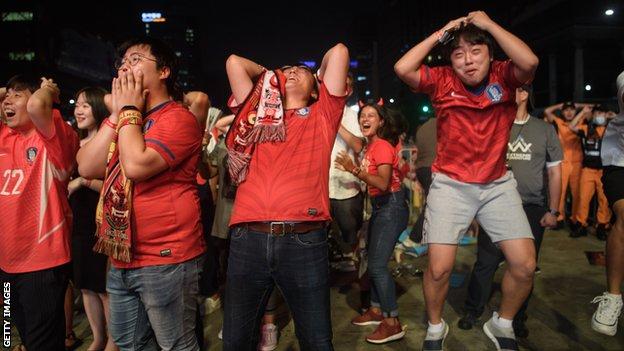 The Korea Football Association (KFA) will not pursue charges against people who threw eggs at the team as they arrived home from the World Cup.

The incident happened as they were lining up for a photograph at Incheon Airport in Seoul on Monday.

South Korea lost their first two games and exited the tournament at the group stage despite a 2-0 win over Germany in their final match.

Yonhap News reported that the KFA do not want airport police to take action.

"We first checked the KFA's intention whether it wants to punish the offenders before we launch our investigation," an Incheon Airport police official said.

"Throwing eggs is considered an assault, but it's also an offence which can't be prosecuted without the victim's objection."

Four years ago the team were pelted with toffees, which is considered an insult in South Korea, when they returned home from Brazil after also failing to make it out of the group stages with two defeats and a draw.