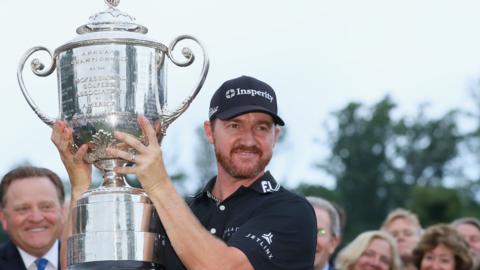 American Jimmy Walker won his first major with a one-shot victory at the US PGA Championship at Baltusrol.

The 37-year-old closed with a bogey-free three-under-par 67 to hold off Australia's world number one Jason Day (67) and win on 14 under.

American Daniel Summerhays (66) was third on 10 under, while Open champion Henrik Stenson faded with a 71 to finish joint seventh on eight under.

England's Tyrrell Hatton (68) and Paul Casey (67) ended on seven under.

For the first time since 2011, all four of the year's majors have been claimed by first-time winners.

England's Danny Willett won the Masters back in April, American Dustin Johnson took the US Open title in June, and Sweden's Stenson picked up the Claret Jug two weeks ago.

How did Walker win it?

Jimmy Walker chips in from the bunker on the 10th hole

The world number 48 opened his week with a five-under 65 to lead the tournament and followed it with a 66 to hold the halfway lead on nine under with Robert Streb.

He did not play on Saturday when the threat of storms forced play in round three to be abandoned.

Walker returned with 49 others on Sunday morning to play round three and he carded a 68 to take a one-shot lead over defending champion Day, who had shot a 67, into the afternoon's final round.

Walker showed no sign of nerves, holing half-a-dozen putts of between three and five feet as he opened with nine straight pars to reach the turn on 11 under.

He then pitched in from a bunker on the 10th for a birdie and followed that with a 30-foot putt on the next to get to 13 under.

A run of five pars was ended by a third birdie on the par-five 17th but it was a more nervy finish than Walker would have hoped for, having taken an iron for safety off the 18th tee, knowing he had a three-shot lead.

However, up on the green Day rolled in a 14-foot eagle putt to close the deficit to one and Walker then hit his second shot into greenside rough.

He chipped his third to 35 feet and had two putts for the win, eventually holing from three feet to win.

"It is surreal, an incredible finish," said Walker. "Jason made an eagle three on the last and forced me to make a par five, it was tough.

"I made it a little more difficult than I would have liked but I did it."