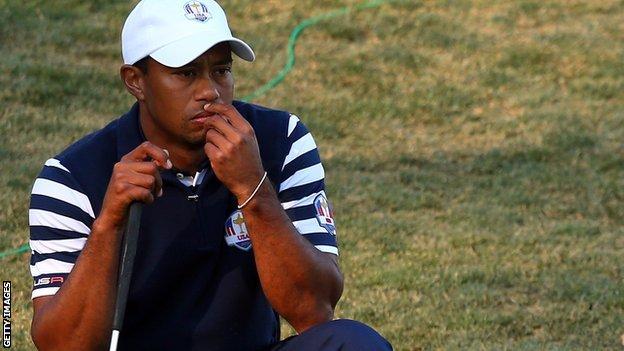 Tiger Woods will be a 'huge advantage' to the USA Ryder Cup team at this week's event in Minnesota, according to fellow vice captain Tom Lehman.

The 14-time major winner has won just one of his six Ryder Cups as a player.

But Lehman said: "There is no peer when it comes to breaking down and attacking a course. He has a level of strategic analysis that nobody else can match."

Europe vice-captain Padraig Harrington said some of their players could find the presence of Woods "off putting".

However, Harrington, who was on the winning side in four of his six appearances as a player in the biennial competition, said that the impact of Woods at Hazeltine could go both ways.

"I don't think we'd be sending our own team out, especially the rookies, and not making it clear in their head that Tiger could be stood there watching the tee shots," he said on BBC Radio 5 live's Sportsweek programme.

"Some of these rookies have never played with Tiger, never really experienced him. Clearly it could be off putting for either team. For us guys playing now he's the greatest golfer we'll ever see, he can be quite intimidating in that sense unless you're prepared for it."

However, he added: "He never has been that guy that rallies the troops. Will he be able to do it as vice-captain? Will he intimidate players? Who knows?"

Europe's Lee Westwood has said that the USA's decision to pick Woods as one of their vice-captains could prove to have an "adverse effect in the team room".

Lehman captained Woods, who has not played since October 2015 because of a back injury, in the 2006 Ryder Cup and admitted that his stature in the game made it difficult to find the right person to pair with him.

"Having a Tiger Woods on your team in any capacity means a lot," Lehman said.

"The difficulty was pairing him with anyone because of the way he thought about the game. There were guys on our team who were intimidated by him."

USA 'have nothing to lose' 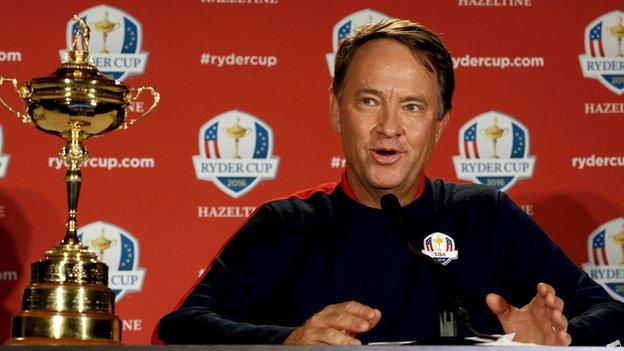 Lehman feels that this year's USA team "do not feel the pressure they have in the past".

The 41st staging of the biennial tournament starts on Friday, 30 September with the US looking to end Europe's run of three successive victories.

Lehman said: "Everyone is loose and ready to go. The US has nothing to lose.

"From what I have observed there is a more collective mindset of what we are trying to achieve."

He added: "I give (captain) Davis Love all the credit in the world for the job that he has done. He has been incredibly inclusive and engaged everyone and there has been a complete buy-in.

"The whole demeanour of the team is way more unified than it has been."

Love will choose the wildcard 12th member of his team on Sunday after the conclusion of the Tour Championship.