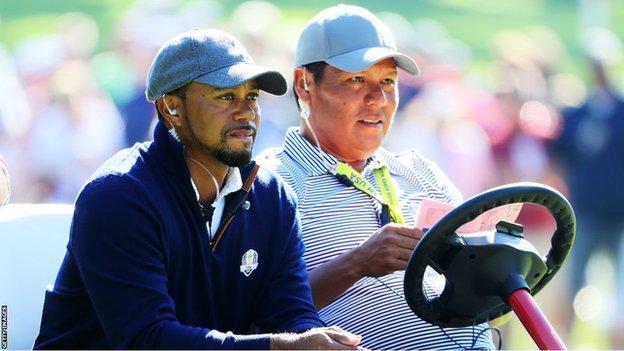 Woods (left) was a vice-captain for the US team who regained the Ryder Cup earlier this month.

Tiger Woods has withdrawn from this week's Safeway Open, saying his game is "vulnerable".

The 14-time major champion will not take part in the event, which would have been his return to competitive action after more than a year out.

The American, 40, last competed in August 2015, since when he has twice had surgery on his back.

Woods is planning to return in early December at the Hero World Challenge, which he hosts in the Bahamas.

The former world number one, now ranked 786, said he had come to his decision after "a lot of soul searching and honest reflection".

In early September Woods had announced he would make his comeback at the Safeway Open before competing at the Turkish Airlines Open in November.

However, in a statement on his website on Monday, he added: "I know that I am not yet ready to play on the PGA Tour or compete in Turkey.

"My health is good, and I feel strong, but my game is vulnerable and not where it needs to be.

"I'm close and I won't stop until I get there."

Woods was a vice-captain in the US team who won the Ryder Cup earlier this month.

He missed the whole of the 2015-16 season season through injury and played in just 11 tournaments the previous season.