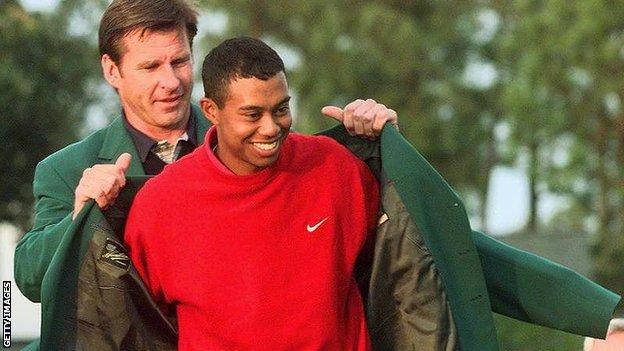 Faldo presented Woods with his first Masters Green Jacket in 1997

Six-time major winner Sir Nick Faldo says "everything is stacking up against" Tiger Woods in his attempt to return to golf following injury.

American Woods, who last competed in August last year, planned to play in this week's Safeway Open, but withdrew saying his game was "too vulnerable".

The 14-time major winner had back surgery in September and October 2015.

"It's going to be a hard grind to come back and compete against the best in the world," said Briton Faldo, 59.

What now for Tiger Woods?

Faldo was "not surprised" when the world number 786 withdrew from the PGA Tour opener on Monday.

He has not won on the Tour since 2013 and sits on 79 victories, three behind the all-time record held by fellow American Sam Snead.

Faldo told BBC Sport: "You wish him well but what does Tiger want to prove?

"I know personally golf is a wicked game, it dangles a carrot. Ten years ago I'd hit balls and think, 'I can still play, I can still hit it' - then you'd go to the course and can't make a score.

"Everything is stacking up against him now. Physically, mentally and obviously competing."

Woods was a vice-captain of the United States' triumphant Ryder Cup team, but Faldo thought he looked like he was "struggling just getting in and out of the golf buggie".

"Watching him walk, he just doesn't look supple to me," added Faldo. "I know the stamina needed to play 72 holes. He may be able to hit balls on a range but there's a rhythm to that - on a course you get a five-minute gap between two shots. I think maybe he is starting to hit the ball better but it's the stamina to play."

Woods has confirmed he will miss the Turkish Airlines Open in November, but said he may be ready for his foundation's event, the Hero World Challenge, in December.