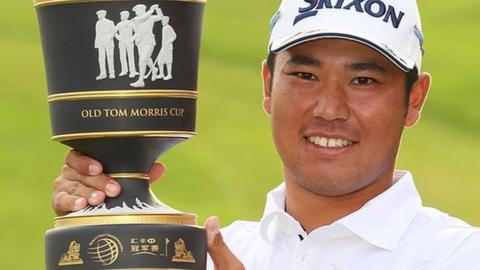 Hideki Matsayuma hit 29 birdies during the tournament in Shanghai, China

Matsuyama shot a six-under 66 in the last round of the WGC-HSBC Champions to finish seven clear of Sweden's Henrik Stenson and American Daniel Berger.

His 29 birdies at Sheshan International was three short of the PGA Tour record.

Finishing on 23 under par, his total was also just one shot off the 72-hole record score at the Chinese course.

The win will lift Matsuyama to a career-high sixth in the world rankings.

Northern Irishman McIlroy carded a 66 to finish tied with American Bill Haas and will move up one place to second when the rankings are published on Monday.

Scotland's defending champion Russell Knox fell away in the final round, shooting a two-over-par 74 to end up ninth alongside Spaniard Sergio Garcia.