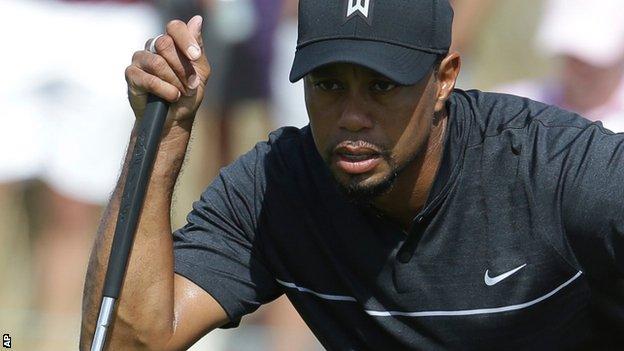 Tiger Woods hit a one-over-par 73 on his return to competitive golf at the Hero World Challenge in the Bahamas.

The 14-time major champion, who has twice undergone surgery during 15 months out, is nine shots off the pace set by fellow American JB Holmes.

Woods, 40, had four birdies in eight holes but he bogeyed the ninth after a wayward drive and poor chip.

Another shot went on the 11th, while double bogeys on the 16th and 18th left the world number 898 a stroke over par.

Woods said he "felt pretty good" and "looking forward to the next few days" after completing his round at the event he hosts to benefit his charitable foundation.

"I hit the ball in three bushes and the water, so it could have been something really good," he said on Sky Sports.

"I got off to a solid start but then I made a few mistakes. I didn't play the par fives particularly well. "I had some awkward shots. If you drive great you can take advantage of this golf course, but if you don't you can end up in bushes or rocks and go sideways."

His first double bogey came after he pulled his approach to the green from the centre of the 16th fairway and was forced to chip out short of the green. He over-hit his fourth and two putted from the back edge for a six.

Woods then pulled his drive on the par-four 18th into a lake and although he hit the pin with his fourth shot, he two-putted from 12 feet for the fourth six of his round.

He had briefly tied for the lead at four under after a run of three birdies from the sixth hole as he played the first nine holes in three-under-par 33.

And although he cancelled out his bogey on the 11th with a birdie on the 15th, his two late double bogeys blotted an otherwise encouraging round.

Holmes leads the 18-man event after an eight-under-par 64 that featured seven birdies and an eagle.

Japan's Hideki Matsuyama is a shot further back on seven under, with US Open winner Dustin Johnson on six under.

England's Olympic champion Justin Rose, playing his first event after a seven-week break, props up the field on two over.