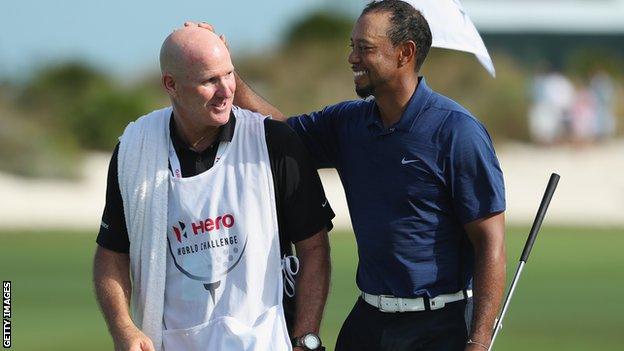 "I wasn't going to compare him to the rest of the field," said Woods' bagman after his boss finished 15th of the 17 players who completed the Hero World Challenge in the Bahamas.

Woods is not only standing tall after playing the pro-am and then 72 holes against some of the world's top players last week, he seems ready to thrive again.

His comeback after more than 15 months recovering from multiple back surgeries was marked by some brilliant play - no-one matched his 24 birdies - which was offset by too many costly errors.

And those mistakes show a considerable amount of rust still must be shed.

"I made some poor decisions," Woods admitted. "I hit the ball in some wrong spots. Quite frankly, it feels kind of weird not to be in a cart.

"Getting my legs back, focusing for a long period of time, these are the things I missed for a year and a half."

"It feels good to be back out here playing again," Woods said. "Competing and trying to beat the best players in the world, I missed it. I love it.

"I've had some very, very difficult times, and have some great friends that have helped me over those times to get me to this point, and I'm just so thankful to be back here playing again."

We heard plenty from Woods during the course of last week and there were some fascinating insights from a player who never misses a chance to build his own aura.

When asked what had been his biggest strength during the first three rounds, he responded in vintage Woods fashion.

Asked to elaborate, he added only: "Always has been."

Woods was sending an unmistakable message that even though he is about to turn 41, has missed an enormous amount of golf in recent times and has not won a major for more than eight years, he believes he remains strongest in the most important facet of the game.

And he laughed at the notion he might be daunted by the form shown by the champion in the Bahamas, Hideki Matsuyama.

It was the Japanese player's fourth win in his past five tournaments - and he was runner-up in the only event he did not win in that sequence, the CIMB Classic. 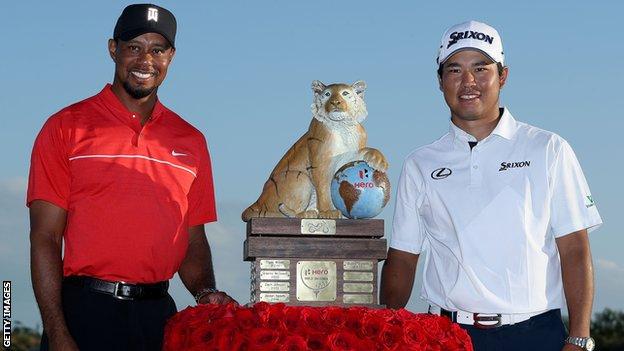 "Daunting? No," Woods said. "I've been there, I know what it feels like. Now do it in the summer, do it when the big events happen."

The former world number one was talking about the challenge Matsuyama faces in carrying his extraordinary form into the majors, yet could easily address those same remarks to himself.

His World Challenge was an end-of-year exhibition whose small field makes the awarding of world ranking points highly questionable. For Woods, the competition and challenge will be far tougher when the new season gets into full swing.

What is beyond question is the fact his return brought a discernible buzz and boost to the game. There was a year-on-year increase of 190% in first-day viewing on the Golf Channel for their most-watched opening round since The Open.

While there are those who rail against Woods instantly being granted the limelight and television airtime, there is little doubt he remains golf's biggest draw.

"You can argue all day long about who the greatest player was," outgoing PGA Tour commissioner Tim Finchem told BBC Sport. "But there isn't any question that Tiger was the biggest star that golf has ever generated.

"Globally recognised, whether you love him or do not like Tiger at all, you have to watch him."

Finchem added: "I always said before Obama became president, Tiger was the most recognisable person on the planet for a good number of years."

Encouragingly, his unscathed return suggests we will see plenty of Woods in 2017. His swing seems looser and less physically stressful, while also generating plenty of length.

The rust will linger a while longer, because he is unlikely to play again until the end of January. By then he will have settled on where "a full" schedule will take him next year.

"We are going to be smart about it," Woods said.

It will be designed with the aim of having him in peak condition for an attempt to land a fifth Masters and 15th major in April. And unless something goes drastically wrong we know Woods will, at the very least, be talking a good game when he heads to Augusta.

As for whether he has any realistic chance of success, we would perhaps be well advised to ask his caddie.