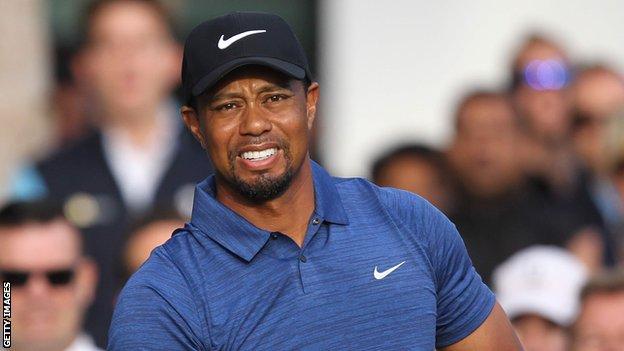 Tiger Woods has withdrawn from the Dubai Desert Classic before the second round, because of a back problem.

The 14-time major winner only returned to action in December after 15 months out following two back operations.

Woods, 41, struggled in the first round in Dubai as he shot a five-over 77.

His agent Mark Steinberg said the American suffered a back spasm on Thursday night but was told by Woods that it was not "the nerve pain that's kept him out for so long".

Steinberg explained: "He feels terrible for the tournament. He wants to be here. He can move around. He can't make a full rotation on the swing.

"The fact he feels it's not the nerve pain is very encouraging for him.

"He doesn't have the strongest back in the world so it's probably easier to spasm because of the issues he's had."

Woods had won the Dubai tournament twice before, but was 12 shots behind overnight leader Sergio Garcia after day one.

"I wasn't in pain at all. I was just trying to hit shots and I wasn't doing a very good job," Woods said after his opening round.

Woods' first return to competitive action after his lengthy lay-off came at the Hero World Challenge - an 18-man tournament in the Bahamas - in December and he finished 15th at the PGA Tour event.

Afterwards, he expressed concerns over the physical challenge of being scheduled to play four full-field tournaments over the next five weeks.

His next outing came at the PGA Tour's Farmers Insurance Open at Torrey Pines where a first round 76 and level-par second round of 72 meant he missed the cut.

The former world number one's next two tournaments were to be the Genesis Open at Riviera from 16-19 February and the Honda Classic in Palm Beach Gardens from 23-26 February but his participation now appears in doubt.

Woods, who has won 79 titles on the PGA Tour, has not won a tournament anywhere since 2013, while his title drought in the major championships dates back to 2008.

Meanwhile, play in Dubai was abandoned on Friday because of high winds which blew trees over and whipped sand across the course. Round two is scheduled to restart on Saturday morning.

South Africa's George Coetzee had completed eight holes of his second round as he moved into the lead on nine under, while Garcia was one shot behind having completed five holes.