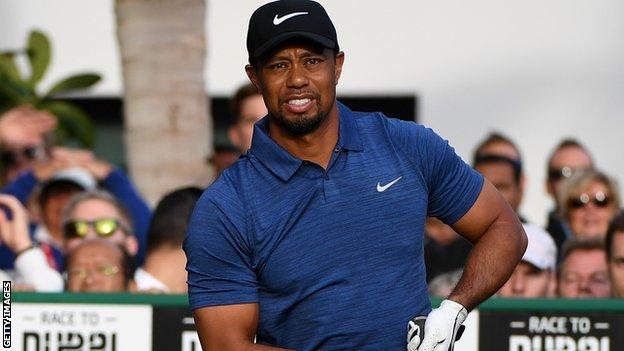 Woods is ranked 674th in the world

Fourteen-time major winner Tiger Woods has withdrawn from next week's Genesis Open and the Honda Classic on 23 February with "ongoing back spasms".

The American, 41, pulled out of this month's Dubai Desert Classic before the second round with the injury.

The former world number one, who returned in December after two back operations, has said his playing schedule will now be reassessed.

The Masters, the first major of the year, takes place from 6-9 April.

"My doctors have advised me not to play the next two weeks, to continue my treatment and to let my back calm down," said the four-time Masters winner.

"This is not what I was hoping for or expecting. I am extremely disappointed."

Woods' first return to competitive action after his lengthy lay-off came at the Hero World Challenge - an 18-man tournament in the Bahamas - in December and he finished 15th at the PGA Tour event.

Afterwards, he expressed concerns over the physical challenge of being scheduled to play four full-field tournaments over five weeks.

His next outing came at the PGA Tour's Farmers Insurance Open at Torrey Pines where a first-round 76 and level-par second round of 72 meant he missed the cut.

He struggled in the first round in Dubai as he shot a five-over 77, before ending the tournament prematurely.