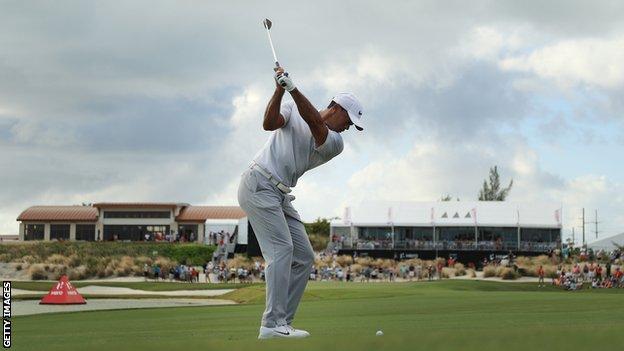 Fourteen-time major winner Tiger Woods continued his impressive return from injury with a four-under-par 68 in round two of the Hero World Challenge.

The American, 41, backed up an opening-round 69 with four birdies and an eagle, before two bogeys in the last seven holes saw him finish seven under.

Compatriot Charley Hoffman leads on 12 under after carding a stunning nine-under 63, making 12 birdies in total.

Tommy Fleetwood of England and Jordan Spieth are second, three shots behind.

Race to Dubai winner Fleetwood, 26, led overnight but threatened to slip out of contention with a double-bogey on 10 and bogey on 11, before rallying with three consecutive birdies from the 13th to finish with a three-under 69.

Justin Rose is a stroke further back after a second straight four-under 68, with Woods in a five-way tie for fifth in the Bahamas.

Woods has had multiple back operations in recent years and in September said he might never return to competitive action.

Starting the day three shots behind Fleetwood, Woods birdied three of the first four holes before rolling in a 15-foot putt for eagle on the ninth to move into the outright lead at the turn.

Having struggled at times with his short game in round one, Woods produced a fine chip from a tight lie to set up birdie on the 11th.

However, he three-putted on 12 to drop his first shot of the round before a miscued drive on the last resulted in another bogey.

"After that 31 on the front nine I could have gotten a few more on that back nine," Woods told the Golf Channel.

"I had a difficult time all day with my speed on the greens - they seemed to be about a foot faster and I airmailed a few of them well past the hole.

"I proved that the surgery was successful, the rehab has been fantastic and now I've got a chance to go out there and play competitive golf again."

Hoffman started his round level with Woods and also went out in 31, thanks to six birdies and one bogey.

The 40-year-old hit back-to-back bogeys on 12 and 13, but birdied the last five holes to surge into the lead.