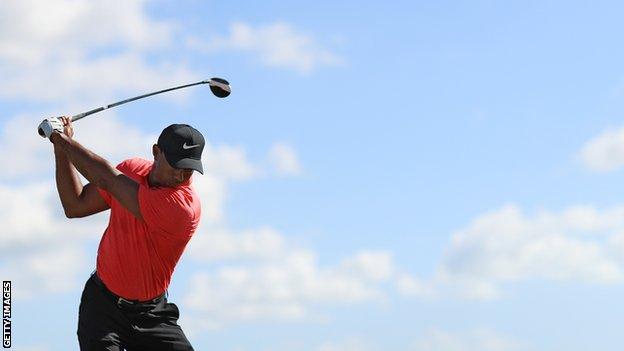 Tiger Woods made an impressive return, finishing eight under par in a share of ninth place at the Hero Challenge

Christmas came early for the game of golf last week, with Tiger Woods' successful return in the Bahamas the perfect present for anyone who considers themselves a fan of the sport.

Tellingly, the physical challenge of completing four competitive rounds for the first time in a year was not the issue for the former world number one. It was all about the standard of his game after a 301-day absence from competition.

And while his performance was not perfect, to finish the Hero Challenge eight under par in a share of ninth place was highly encouraging.

Yes, this was a fun, season-ending shootout with a field limited to only 18 competitors, but Woods still beat PGA Tour player of the year Justin Thomas, world number one Dustin Johnson and the US Open champion Brooks Koepka.

Woods fired rounds of 69, 68, 75 and 68 and had two eagles, 17 birdies and only one double bogey. Albany is a resort course and there are far tougher golfing tests but realistically Woods could not have asked for more from his return.

"You can see the speed in the swing and that's the biggest thing. In the final round he hit a two iron over the back of the green, pitching it 250 yards. He's doing something right there isn't he?"

Woods' putting stroke also looked very assured and the only apparent weaknesses occurred with some touch shots around the greens that went awry.

"Those are the sort of things, when you come back after a break, your golfing brain takes a couple of rounds to get back into it," Wood pointed out.

"I thought there were so many positives for him last week and I think he'd be over the moon with that performance."

And the 2016 winner of the PGA Championship is thrilled that golf's biggest personality is back in the game. Wood says it was his near namesake who inspired him to take up the sport.

"I grew up with him, he won his first Masters when I was 10 years old," Wood said.

"I think for anybody of my generation, there's been a void in the last two, three, four years when Tiger's not been there. It's just not been the same.

"You watch last week and not just me but so many people on Twitter were making so many comments and non golfers as well.

"It does so much for the game and it makes you feel that golf is really something special when Tiger's playing. All of a sudden it's in other news outlets and people are talking about it and it really, really makes you want to watch."

Woods commands such attention he often overshadows other players in the field, but Wood has no time for those who see this as a problem.

"I think that's madness," said the 30-year-old Bristolian. "I find it amazing that people can comment like that. How can you not be a fan of Tiger Woods in 2000 or 2005? Whenever he was playing his best golf.

"Things have happened in his life that not everyone is going to agree with, but as a golfer you cannot hold anything against him, he's just been incredible for the game.

"Most players will say it, we are in tournaments for prize funds based on interest in the game and most of it was down to Tiger Woods."

Now Woods is preparing to work out which tournaments to enter next year based around the major championships. He is looking to pace himself and seems to be processing a less ambitious schedule than the one he set out this time last year.

His aim then was to play three weeks in a row at the start of this year, beginning at Torrey Pines. There he missed the cut before withdrawing after only one round in Dubai the following week with his season in ruins.

A more cautious approach this time makes sense. He will turn 42 before we next see him back in action and he was still using precautionary anti-inflammatory tablets in the Bahamas last week.

Woods has to manage a back that has one fewer joint due to last April's disc fusion surgery. That, inevitably, means stress being referred to other areas and how they cope is an unknown quantity.

Nevertheless, he looked fit, healthy, strong and happy. That's a potent combination for a golfer of his immense feats.

It is more than reasonable to expect Woods will inject huge interest and buzz into the 2018 golfing calendar. "He brings so much more to an event," Wood told me.

"Top, top sportsmen in the world, or sportswomen, they have this aura - like Beckham did or Ronaldo or Roger Federer. Tiger's got that and certainly not in my generation has there been a golfer with that same sort of superstar aura.

"He's just got to walk on to the range and you've got a sense that he is there."

Nick Faldo helps 1997 Masters winner Tiger Woods of the USA put on the Green Jacket; Tiger Woods was only 21 years old when he first wore the famous Green jacket for winning The Masters in 1997

Wood played in the same group as Woods back in 2013 at the WGC Bridgestone Invitational when the former world number one collected the last of his 79 PGA Tour titles to date.

"When I was playing as a junior I'd dream of playing with Tiger Woods and there I was in the last group in a World Golf Championship on a Saturday and it was an awesome experience," Wood said.

Now there is the enticing prospect of Woods competing with the generation of players he inspired and who currently dominate the game. "Everyone wants to see Tiger head to head with Spieth or Thomas or Rory (McIlroy) and players like that," Wood added.

"They've got everything to gain in that situation and that just makes it even better for golf."

Woods still has a long way to go on the comeback trail. Let's see how he does against full fields of elite players on courses set up to the penal standards of the PGA Tour.

Much more evidence is required before anyone could reliably predict another era of Tiger dominance. But the fact that he is palpably up for the fight is well worth celebrating.