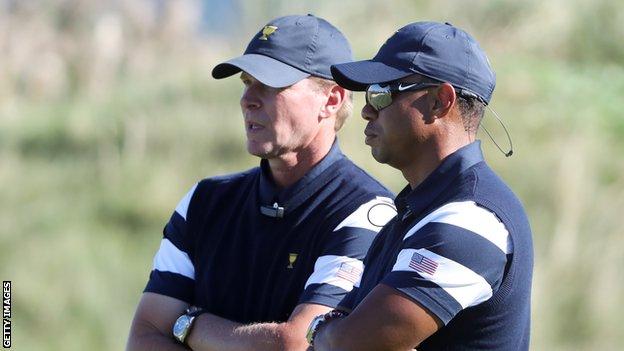 Steve Stricker (left) served as the US captain during last year's Presidents Cup victory, with Woods as his assistant

United States captain Jim Furyk has named Tiger Woods and Steve Stricker as his vice-captains for the 2018 Ryder Cup at Le Golf National in Paris.

America, who beat Europe in 2016 at Hazeltine, will attempt to retain the trophy from 28-30 September.

"To win in Paris will be a great challenge. To have Steve and Tiger share the journey is important for me and for American golf," Furyk said.

"Their knowledge and experience will be an invaluable resource in our effort to retain the Ryder Cup."

Furyk will name additional vice-captains at a later date.

In last week's Genesis Open, Woods said he would be open to the role of a "playing vice-captain" despite missing the cut.

He has not played in the Ryder Cup since the 2012 matches at Medinah.

Woods will be making his second appearance as a vice-captain, having been an assistant to Love in the 2016 victory alongside Furyk, Stricker and Tom Lehman.

"I'd like to do what's best for Tiger," Furyk added. "If he could be valuable as a player, I'm sure we would want him playing on this team but I'm anxious to see how he plays this year."

Stricker will appear for the third time having also served as an assistant to Tom Watson during the defeat at Gleneagles in 2014.

The US have not won in Europe since 1993 at The Belfry and face a European team led by Denmark's Thomas Bjorn, who was appointed as captain in December.