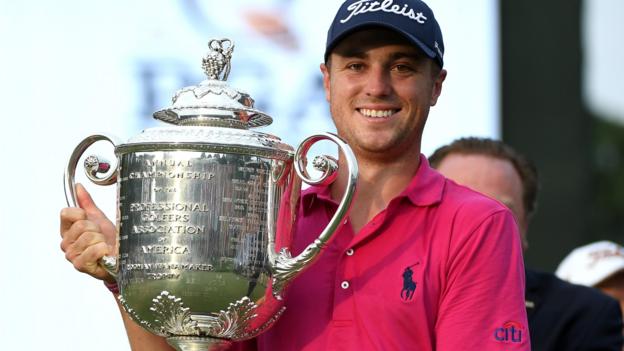 The US PGA Championship has been moved from August to May as part of a revamp which will see the PGA Tour season end before the start of the NFL campaign.

From next year the PGA Championship, traditionally the golf season's final major, will follow the US Masters.

It means the Open Championship - which will continue to be held in July - will become the last major in the calendar.

The PGA Tour season will end before the end of August to avoid clashing with the opening American football fixtures.

The Players Championship - often described as the unofficial fifth major - has been moved to March from its previous date in May, with the end-of-season FedEx Cup play-offs shortened to three events and finishing on 25 August.

"It's been our stated objective for several years to create better sequencing of our tournaments that golf fans around the world can engage in from start to finish," said PGA Tour commissioner Jay Monahan.

"And by concluding at the end of August, the FedEx Cup play-offs no longer have the challenge of sharing the stage with college and professional football."

This year's Open takes place from 19-22 July at Carnoustie in Scotland, with the PGA Championship in Missouri from 9-12 August.