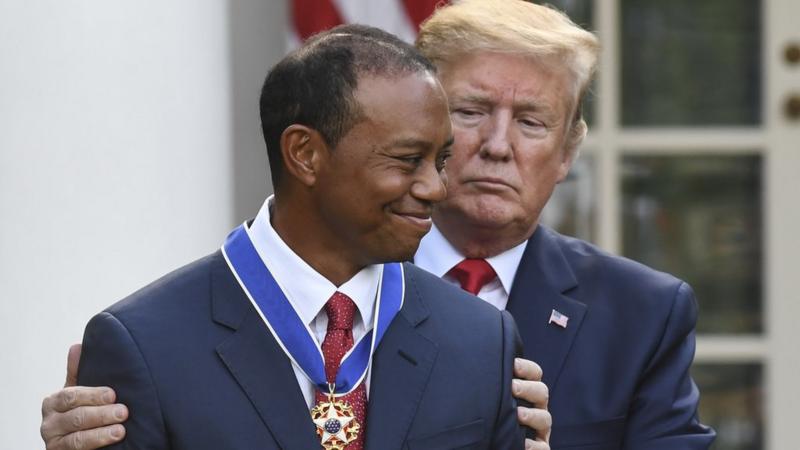 President Trump praised Tiger Woods as an inspiration for Americans

The 43-year-old, who won the Masters at Augusta in April, received the Presidential Medal of Freedom at a White House ceremony.

Woods thanked his mother and two children during the ceremony.

"You have seen the good and the bad, the highs and the lows," said Woods.

"I would not be in this position without all of your help."

Woods' win at Augusta last month was his fifth Masters title and ended an 11-year wait to claim his 15th major.

His first Masters win came at the age of 21, when he celebrated with his father, Earl, who died in 2006.

"My dad is no longer here but my mom is here, I love you mom.

"The amazing Masters experience I just had a few weeks ago certainly is part of the highlight of what I've accomplished in my life on the golf course."

The prize recognises "individuals who have made exceptional contributions to the security or national interests of America, to world peace, or to cultural or other significant public or private endeavours".

Woods is the fourth golfer to receive the accolade, after Jack Nicklaus, Arnold Palmer and the PGA Tour's first black player, Charlie Sifford.

Woods overcame persistent injury problems - including four back operations culminating in fusion surgery in April 2017 - to win his first major title for over a decade with a one-shot victory at Augusta.

Muhammad Ali, Billie Jean King and Michael Jordan are among other athletes to win the award.