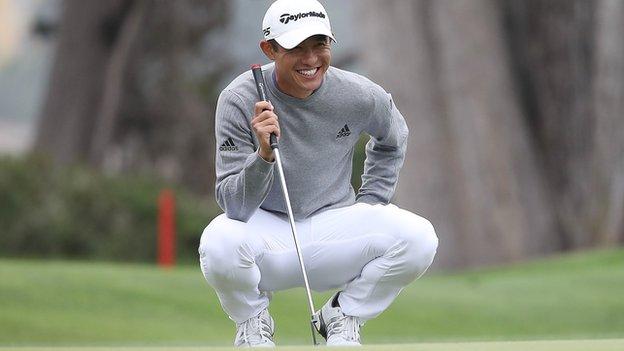 American Collin Morikawa emerged from a stacked leaderboard to win the 2020 US PGA Championship after a flawless final round in San Francisco.

At one point on the back nine, six players shared the lead but an eagle on the 16th saw the 23-year-old go clear.

The world number 12 carded a six-under 64 at TPC Harding Park to reach 13 under in just his second major.

England's Paul Casey was two shots back in a tie for second with overnight leader Dustin Johnson after a 66.

Like Morikawa, Matthew Wolff was another unheralded American to rise through the field on Sunday, shooting a 65 to finish on 10 under.

He tied for fourth with Jason Day, Bryson DeChambeau and Tony Finau, who all carded 66s on a nail-biting final day which made a mockery of concerns over how competitive the year's first major would be with no fans.

England's Justin Rose carded a 67 to finish a shot further back after being three behind the lead overnight, along with compatriot Tommy Fleetwood, who slipped to three under.

Two-time defending champion Brooks Koepka trailed Johnson by two heading into the final round yet stumbled to a four-over 74 to also finish on three under. 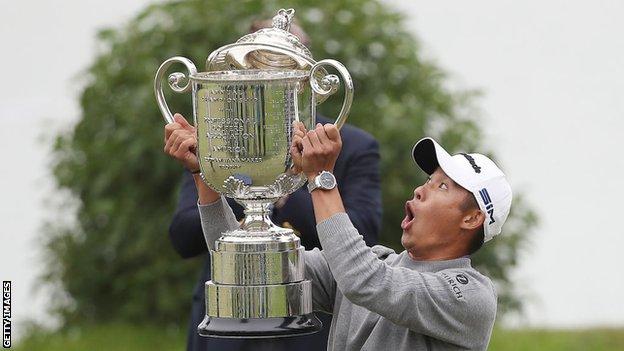 After a flawless final round, Morikawa's only blemish came when managed to drop the lid as he lifted the Wanamaker Trophy

Heading into the final day, all the talk was of another potential battle between Johnson and Koepka after Koepka held off his Ryder Cup team-mate to clinch last year's US PGA.

And Koepka cranked up their friendly rivalry by belittling Johnson's solitary major win after day three, adding: "I like my chances. When I've been in this position before I've capitalised."

Yet Koepka didn't factor in the leaderboard logjam as another American stole the show, one who is in just his second year on the PGA Tour.

Remarkably, Morikawa has more wins on the tour than missed cuts, and was second at the Charles Schwab Challenge in June before winning last month's Workday Charity Open.

He didn't appear on the radar until shooting a 65 to go two off the lead on day three at Harding Park, just 20 miles from where he went to college at the University of California in Berkeley.

But as Johnson tried to hold off the chasing pack, Morikawa moved into the fray with three birdies in his first 10 holes.

He then chipped in for a birdie on the par-four 14th to become the first man to reach 11 under and despite being joined by Casey, he hit the shot of the week from the 16th tee.

Morikawa hit it to within seven feet on the par four and held his nerve to sink the eagle putt to put himself on the brink of becoming just the ninth player to win the US PGA on their debut, and the first since Keegan Bradley in 2011.

"It's amazing," said Morikawa, who grew up in Los Angeles. "As a little kid, watching all these professionals, this is always what I've wanted to do.

"I felt very comfortable from the start, as an amateur, junior golfer, turning professional last year. But to finally close it off and come out here in San Francisco, pretty much my second home where I spent the last four years, it's pretty special." 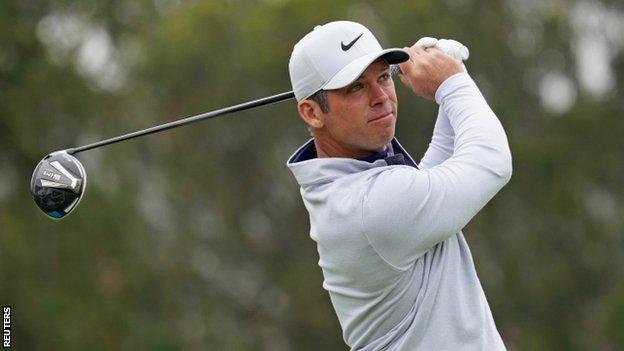 Morikawa was four years old when Paul Casey claimed his first European Tour win in 2001, and since then the Englishman has seldom dropped out of the world's top 50.

There has never been any doubt over his ability, it was whether he could produce when it really mattered - a major championship.

The 43-year-old's yet to win a Players Championship or World Golf Championship event, let alone a major, with his previous best a tie for third at the 2010 Open.

Yet he remains one of the most consistent players on the tour and after two wins last year, he travelled to San Francisco as number 28 in the world.

After a first round of 68, he said he felt more confident with caddie John McLaren back on the bag and having finished the third round two off the lead, there was genuine belief this could be his time.

Three birdies from his first 10 holes put Casey in contention of becoming England's first US PGA Championship winner since 1919 - and the oldest first-time major winner since 1967.

But he dropped a shot at the 13th after overcooking his approach, and despite responding with two more birdies, Casey graciously said Morikawa deserved victory after that "glorious" tee shot.