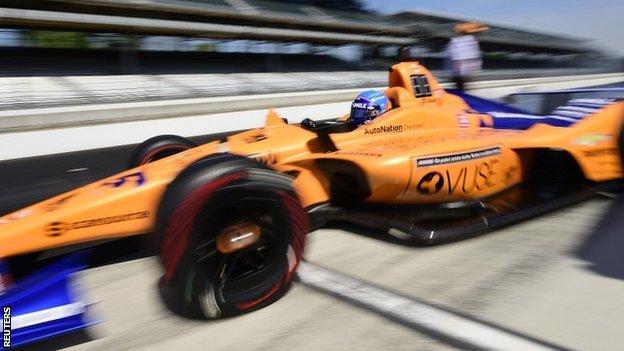 Fernando Alonso ended the final day's practice before qualifying for the Indianapolis 500 with the 24th fastest time after a difficult week.

The two-time Formula 1 champion's McLaren team was set up especially for this year's race and has struggled on its first experience at the high-speed oval.

Spanish driver Alonso, 37, lost the vast majority of the first day with an electrical issue, crashed on the second day and did not run at all on the third.

He had a full day on Friday but faces a difficult challenge for Saturday's qualifying.

In what Indy calls the 'no-tow speeds' - the laps done without the benefit of a slipstream behind another car, as will be the case in qualifying, when cars run on their own - Alonso was only 31st fastest. There are 33 places on the grid, and 37 drivers attempting to qualify.

How does Indy qualifying work?

Indy has a unique qualifying system, which is split over two days.

On Saturday, the drivers that will compete for the top nine places on the grid are decided, as are grid places from 10 to 30.

The race then takes place on Sunday, 26 May, the same day as the Monaco Grand Prix.

Why is Alonso at Indy?

This is Alonso's second attempt at the Indy 500, which he is trying to win to secure the final part of motorsport's so-called triple crown. It also includes the Le Mans 24 Hours, which he won in 2018, and the Monaco Grand Prix, which he has won twice.

If he manages it, he will join two-time F1 champion Graham Hill as the only man to achieve the feat.

How have McLaren fared?

It has been a difficult baptism for McLaren at one of the world's most demanding tracks, where average lap speeds are 230mph and mistakes are punished in the most brutal fashion.

McLaren spent a day at Texas Speedway in the second week of April, before the official first test at Indy on 25 April.

On their first day at the historic track, which first hosted the Indy 500 in 1911, Alonso was able to do only 29 laps as a result of electronics problems.

This week's practice has seen a series of issues for McLaren that have left Alonso and the team badly under-prepared for qualifying this weekend.

He completed just 50 laps of the 2.5-mile 'super-speedway' on the first day on Tuesday as a result of problems the team traced to a wiring loom, and he was 32nd fastest.

On Wednesday, Alonso had completed 46 laps before crashing at Turn Three, losing the front end and understeering into the barriers.

McLaren planned to be out first thing on Thursday for a full day, but repairing the car took longer than expected, and when they discovered the engine had been damaged as well the session was a write-off.

That left only one day on Friday to finalise set up the car and 'trim it out' for qualifying - reduce the downforce as much as they dare for maximum speed over the four consecutive laps drivers have to run for the average speed that defines their qualifying time.

Does he have more time?

Drivers have a total of one hour's practice on Saturday morning, split into two half-hour sessions before qualifying starts at 11:00 local time (1600 BST).

The session runs for nearly seven hours, and drivers can have as many attempts as they want within the time frame, although they are restricted by a complicated queueing protocol.

Two years ago, when Alonso was driving a McLaren-branded car run by the leading Andretti team, he qualified fifth, despite a brief engine hiccup on his run.

He went on to lead the race for 27 laps before retiring when looking poised to launch a bid for victory when his car suffered engine failure in the closing stag.