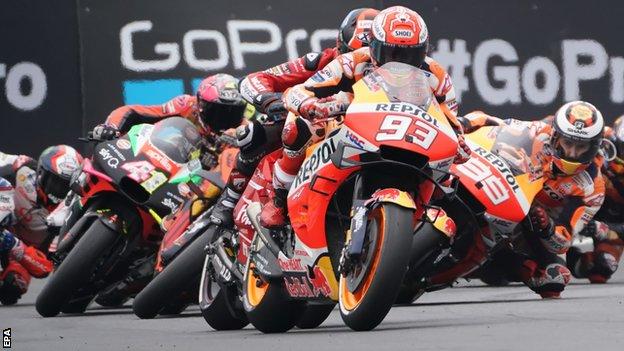 Seven-time world champion Marc Marquez increased his lead at the top of the MotoGP standings with victory in the French MotoGP at Le Mans.

The 26-year-old Spaniard, who started on pole, finished almost two seconds ahead of Italy's Andrea Dovizioso.

Dovizioso moved up to second in the standings, eight points behind Marquez, winner of five of the last six titles.

It was Marquez's 47th victory - joint fourth on the all-time list with team-mate Jorge Lorenzo - and Honda's 300th.

Marquez was overtaken by Australian Jack Miller on the fifth lap, but the defending champion regained the lead two laps later before pulling away from the chasing pack.

Compatriot Alex Rins, who was second in the standings before the race, finished 10th after starting 19th following a disappointing performance in Saturday's qualifying.