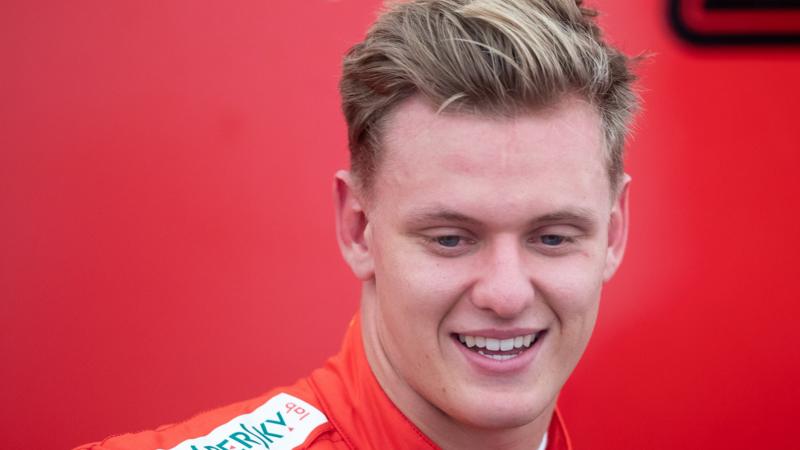 Mick Schumacher is a member of the Ferrari driver academy

The 20-year-old's win came at a track where his father Michael won four of his all-time record 91 grands prix.

Schumacher started from pole position, earned by finishing eighth in Saturday's 'feature' race, and fended off Japan's Nobuharu Matsushita for the 28 laps.

"Credit to Nobu, who kept me entertained. It wasn't easy.

"I am just so happy. (It was) quite hard. Obviously the tyres were degrading and not easy to keep them alive, always having pressure and checking mirrors. It was entertaining."

Schumacher is a member of the Ferrari driver academy and is widely tipped for a move up to F1 in the future.

It remains to be seen whether this happens as early as next year, however.

Schumacher, who tested a Ferrari F1 car in Bahrain in April, drives for the leading Prema team and has had an up-and-down first season in F2, the final feeder category before F1.

His previous best result was a fourth place in Austria. He lies 11th in the championship and he and his mentors may feel he would benefit from a second season in F2 before being subjected to the pressure that will inevitably fall on the son of such a famous father should he graduate to motorsport's top category.

Schumacher said: "Only time can tell. Having the first victory in F2 is a great thing. I need to work a lot on myself. Whether I go to F1 next year or in two years or maybe three, I don't know.

"I will do my best possible, try to learn as much as possible so that when I do the step I will be ready and able to feel comfortable."

Asked about the coincidence of winning his first race at a track where in 1998 Michael Schumacher took one of his most famous victories, Mick said: "It is very special and also thinking back to last year (in Formula 3) when I won for the first time in Spa, where my Dad was also very comfortable."

F2 events have two races per weekend, a longer 'feature' race on Saturdays featuring pit stops and a shorter 'sprint' race on Sunday with no stops.

The rules dictate the top eight positions from the feature race are reversed to give the starting positions for the sprint.