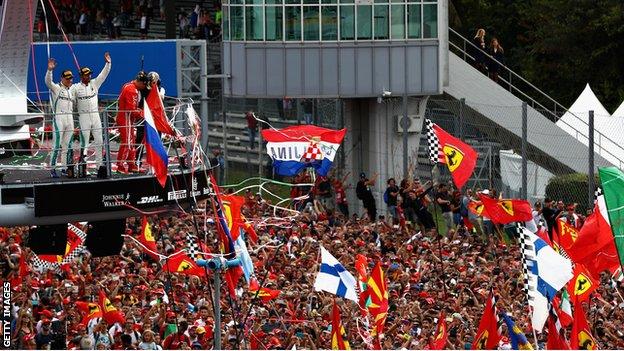 Lewis Hamilton took his fifth victory at Monza in 2018

Formula 1 has secured the future of the Italian Grand Prix until at least the end of 2024.

The new contract was announced at an event held in Milan on Wednesday to celebrate the race's 90th anniversary ahead of Sunday's grand prix at Monza.

The historic track has held 68 F1 world championship races, more than any other.

Only Italy and Britain have hosted F1 rounds every year since the championship's inaugural year in 1950.

F1 chairman and chief executive officer Chase Carey said: "History, speed and passion are words that motorsport fans associate with Monza. The feeling one gets at this Grand Prix is truly unique."

F1's owners, the US group Liberty Media, have pledged to protect the sport's most historic races at the same as extending the calendar and branching out into new territories.

Next year, F1 will have a record 22-race season, following the return of the Dutch Grand Prix for the first time since 1985, and the addition of a new race in the Vietnamese capital Hanoi.