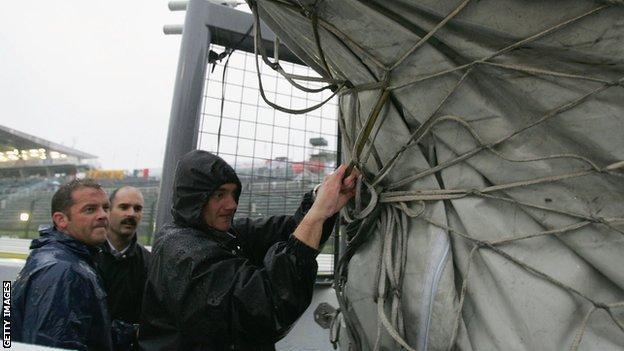 In both 2004 and 2010, qualifying at Suzuka had to be postponed until Sunday morning before the race

Formula 1 has delayed a decision on whether to cancel Japanese Grand Prix qualifying as a result of Typhoon Hagibis until Friday.

The storm is expected to make landfall on Saturday on the south coast of Honshu island, where Suzuka is located.

A statement from F1 bosses said: "Every effort is being made to minimise disruption to the F1 timetable.

"However, the safety of fans, competitors and everyone at the Suzuka circuit remains the top priority."

Governing body the FIA and F1 said it was "closely monitoring Typhoon Hagibis and its potential impact on the Japanese Grand Prix".

The potential impact of the tropical storm, said to be the biggest of the year, has already led to the cancellation of two matches at the Rugby World Cup.

F1 organisers are waiting to see whether the storm continues on its current track before deciding whether to cancel qualifying on Saturday.

That decision is expected to come before the end of Friday and will primarily be down to Japanese local authorities, whose responsibility it is to decide whether to close the circuit and advise people to stay indoors to reduce the risk to life from the storm.

If authorities do not take that action, F1 will almost certainly try to run Saturday's programme, which has final practice at 12:00 local time (02:00 BST) and qualifying at 15:00.

Wind speeds are forecast to be 160km/h on Saturday afternoon.

Ferrari driver Charles Leclerc said: "It is pretty clear if the typhoon is going to come here, there is no way we can drive."

Qualifying in Japan has twice before had to be postponed because of the threat of a typhoon, in 2004 and 2010. In both cases, it was run on Sunday morning, before the race in the afternoon.

The US Grand Prix in 2015 was also affected by a tropical storm. There, Friday second practice was cancelled. Saturday morning practice went ahead with no spectators, after the public were advised not to come to the track for their own safety, and qualifying was subject to a series of delays before eventually being delayed until Sunday.