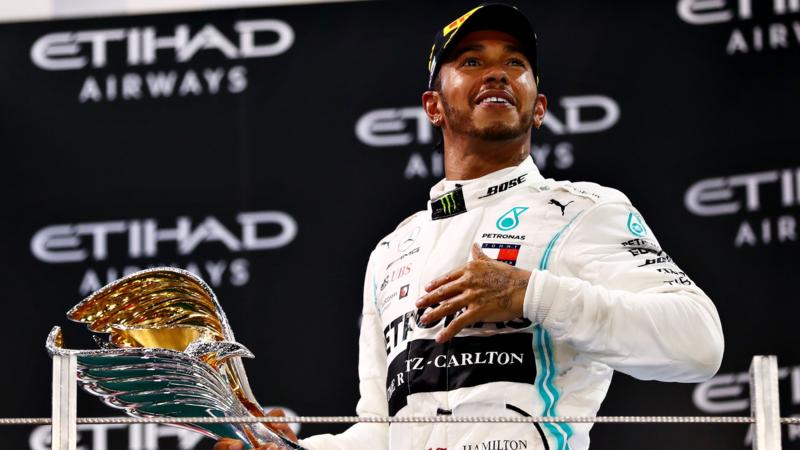 Lewis Hamilton dominated the Abu Dhabi Grand Prix to end the season in which he won a sixth world drivers' title on a high.

The Mercedes driver led away from pole position and cruised off into the distance, untroubled by anyone behind.

Charles Leclerc ran second in the early laps, ahead of Verstappen, but slipped back to third.

Leclerc held off an attack from Mercedes' Valtteri Bottas in the closing stages, the Finn right on his gearbox on the final lap, after an excellent race from the back of the grid.

Leclerc was at risk of losing third place because governing body the FIA discovered before the race that the amount of fuel Ferrari said was in his car was different from the amount that was when it was checked.

But after a post-race investigation, Ferrari were fined €50,000 for what had been a 4.88kg discrepancy and the result stood. 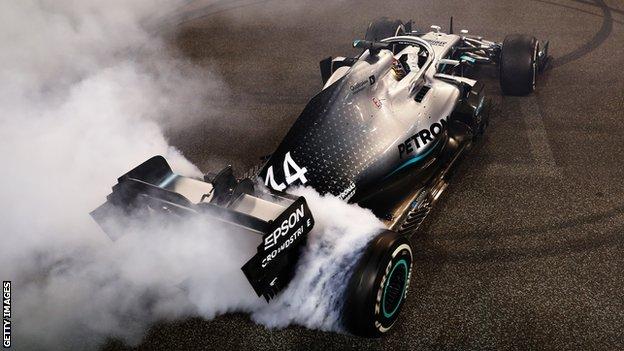 Hamilton's victory was his 11th of the 21 races that have been held this season, and equals his previous best performance - in 2014 and 2018.

It also moves his career total to 84 wins, just seven behind the all-time record held by Michael Schumacher.

That sets the 34-year-old Briton up to potentially exceed Schumacher's win tally and match his all-time record of seven world championships in 2020.

He was in a race of his own from the start, quickly opening a sizeable gap over Leclerc and never looking under any threat thereafter.

Hamilton, who tied up the title last month at the US Grand Prix, said: "I'm proud but just super-grateful for this incredible team and all at Mercedes who have continued to push this year.

"Even though we had the championship won we wanted to keep our head down and see if we could extract more from this beautiful car."

Leclerc initially appeared to have an advantage over Verstappen but his race began to fall apart when Ferrari decided to call him in for a pit stop on lap 12, early for his starting tyre choice of the medium compound.

Verstappen ran 13 laps longer before his first stop and quickly caught and passed Leclerc from four seconds back when he rejoined, despite a problem with his engine's throttle response.

Leclerc switched on to a two-stop strategy and finished third, measuring his pace to hold off Bottas. 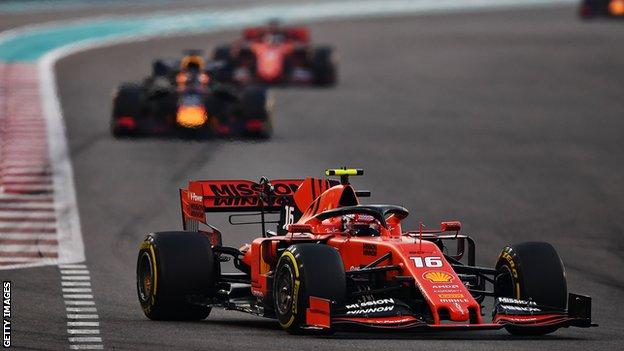 The Finn's task was made harder by the fact the DRS overtaking aid was not operating for the first 18 laps of the race because of a technical problem.

But he made good progress anyway and by the second part of the race was pressuring Ferrari's Sebastian Vettel and Red Bull's Alexander Albon behind the top three.

Vettel pitted out of Bottas' way, then Bottas passed Albon on track.

Mercedes had hopes that Leclerc's new soft tyres, fitted at his second pit stop, might fade in the closing laps, but Leclerc did enough to just hang on, despite his car's high tyre usage.

Vettel, who dropped to sixth when he made a second stop on the same lap as Leclerc, homed in on Albon in the closing stages and passed him for fifth with two laps to go. 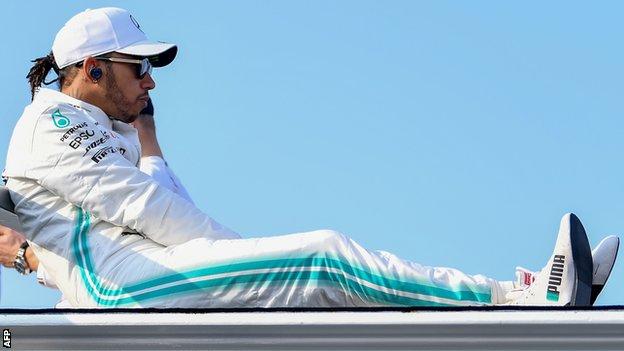 "Hello? Is that Ferrari?" Hamilton has been the subject of rumours in the paddock he could join Ferrari

Behind the top six cars, the main interest was how the minor points places would settle the battle for sixth in the championship, with Toro Rosso's Pierre Gasly and McLaren's Carlos Sainz tied on points before the race but the Frenchman ahead on results countback.

Gasly's hopes looked done on the first lap, when he was hit by Racing Point's Lance Stroll and punted into the Canadian's team-mate Sergio Perez at the first corner, damaging his front wing.

Gasly needed to stop for a new wing and his race never recovered.

But his hopes increased as Sainz's race looked like it might be undone by his need to start on the unfavourable soft tyre because he qualified in the top 10, which gave the advantage to the quicker runners just outside the top 10 on the grid, such as Perez and Toro Rosso's Daniil Kvyat.

McLaren gambled on a late pit stop for fresh tyres, which dropped Sainz out of the points place he needed, but gave him the speed he required in the closing laps.

He climbed back up from 14th place and passed Renault's Nico Hulkenberg for 10th on the last lap, giving him the point he needed to seal sixth - a well-deserved achievement after an excellent first season with McLaren. 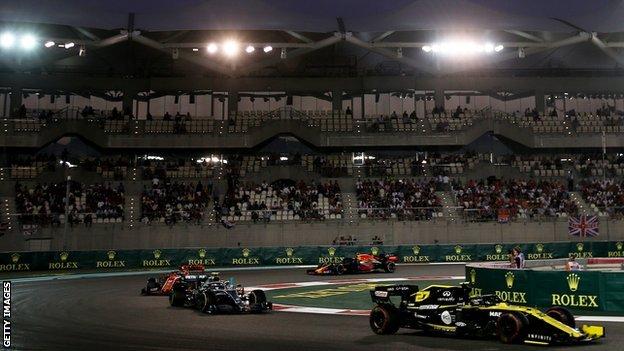