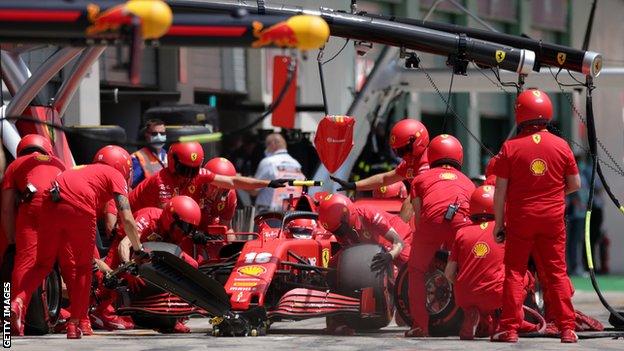 Ferrari finished 2.700 seconds behind the Mercedes of Valtteri Bottas in Austria

Ferrari are bringing forward some planned upgrades to their car after a disappointing showing at the season-opening Austrian Grand Prix.

Lead driver Charles Leclerc was runner-up on Sunday, but the car was a second off the pace in qualifying seventh.

At this weekend's Styrian Grand Prix, Ferrari will introduce some of the parts originally scheduled for the subsequent race in Hungary.

"We know there's lots of work to do. This is certainly not the grid position that a team like Ferrari should have.

"It's clear that we have to improve on all fronts. The only solution is to react."

The car's main problem was a lack of speed on the straights, where it was losing 0.7 seconds a lap to Mercedes.

Camilleri added: "It's not that these new parts are expected to completely bridge the gap compared to the front of the grid.

"But the progress in terms of lap time could allow the team to move up the order and put the drivers in a better condition to be able to display their talent.

"Moreover, it's about checking that the chosen direction of development is the right one, precisely because it will be possible to do a true back-to-back on every upgrade."

Ferrari said before the race weekend that they had discovered a problem with their car since it ran in pre-season testing, prompting a "significant change of direction in terms of development".

But their lack of pace in Austria was even worse than they were expecting - the car was not only a second off the Mercedes, but it was also nearly a second slower than Ferrari had been at the same track last year, when Leclerc was on pole position.

Camilleri, speaking in a statement issued by the team, said he had "every confidence" in team principal Mattia Binotto and the rest of the team to "address our shortcomings".

Leclerc was running sixth for most of the race but moved up to second in the closing laps as a result of retirements in front of him and two audacious overtaking moves on McLaren's Carlos Sainz and Racing Point's Sergio Perez.

He later described it as one of the best drives of his career.

Team-mate Sebastian Vettel finished 10th, after a spin while trying an ambitious overtaking manoeuvre on Sainz. It was the latest in a series of mistakes during races that stretch back two years.

The four-time champion was struggling throughout the race with the handling of his car and said he was surprised he had not spun more times.