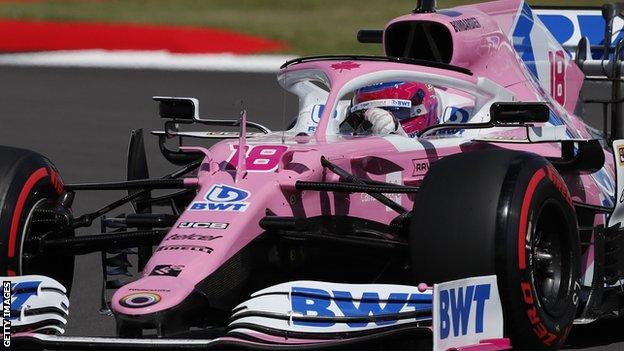 Racing Point's 15-point deduction will only affect the constructors' championship

Ferrari and Renault have confirmed they will appeal against the punishment given to Racing Point in Formula 1's "copying" controversy.

No date has been set for the hearing at the FIA International Court of Appeal.

McLaren lodged an intention to appeal but decided not to proceed, while Racing Point and Williams have until Wednesday to decide.

Ferrari's intention in pursuing their appeal is to seek further clarity on the ramifications of the verdict, particularly on the legality of so-called "copycat cars".

In addition to confirming they were going ahead, Renault said they would "continue to work intensively with the FIA and all stakeholders to develop and implement a clear and enforceable regulatory framework that will ensure all teams participating in the 2021 season will develop their original aerodynamic concept by themselves".

McLaren said it "welcomed" the stewards' findings and the demonstration that "transgressions of the rules will be investigated and punished".

A statement added: "McLaren Racing is pleased that the FIA [has said it] will further clarify the sporting and technical regulations to protect F1 as a sport where teams are clearly defined as constructors, and removes the potential that the World Championship includes cars that are, in effect, copies of other competitors."

McLaren said they would follow the case pursued by Ferrari and Renault "with interest".

Racing Point and Williams have until Wednesday morning to decide whether to pursue their appeals.

Racing Point have insisted they acted within the rules in using Mercedes' 2019 brake ducts as the basis for a design they have used on their 2020 car, which has been widely dubbed the 'pink Mercedes' because the team sought to copy last year's entire world championship-winning car as much as possible.

But the FIA stewards in their verdict on Friday likened Racing Point's design process on the brake ducts to "using tracing paper to copy a shape/drawing" after Mercedes legally supplied drawings of their 2019 brake ducts to Racing Point last year.

Team principal Otmar Szafnauer said the stewards were "wrong in that assessment".

The punishment arises from a change in the regulations on the status of brake ducts from the 2019 to 2020 season, which added them to the category of so-called "listed parts" that teams have to design themselves.

Brake ducts play an important role in the aerodynamics of Formula 1 cars.

Racing Point were legally supplied with the design details of Mercedes' 2019 brake ducts last year, but the stewards penalised them on the basis that they were not allowed to use the same design this year.