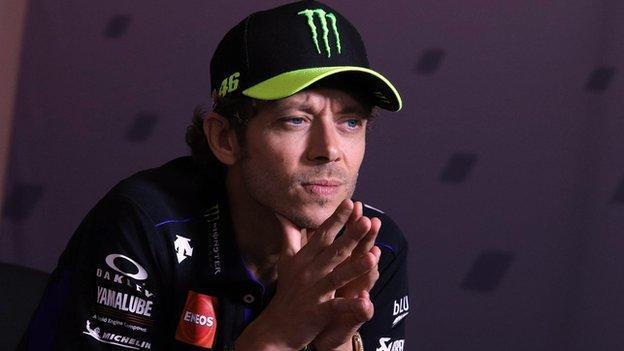 Rossi is the only rider in history to win World Championships in 125cc, 250cc, 500cc and MotoGP

Valentino Rossi says he has tested positive for coronavirus and expects to miss the next two races of the MotoGP season.

The 41-year-old Italian is a nine-time world champion and 13th in this season's standings.

The next race will be in Aragon, Spain on 18 October, with another race at the same venue a week later.

"Unfortunately, this morning I woke up and I was not feeling good," Rossi said in a statement on social media.

"My bones were sore and I had a slight fever, so I immediately called the doctor who tested me twice."

He added that, while the "quick PCR test was negative", the second one was positive.

"I am so disappointed that I will have to miss the race at Aragon," said Rossi.

"I'd like to be optimistic and confident, but I expect the second round in Aragon to be a no-go for me as well."