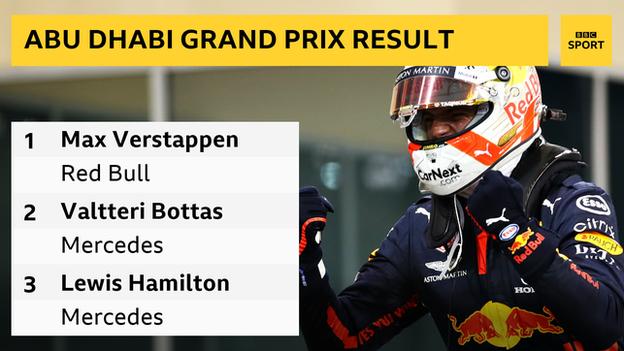 Max Verstappen ended a frustrating season for Red Bull on a high with victory in the Abu Dhabi Grand Prix.

The Dutchman took his second win of the year ahead of Mercedes' Valtteri Bottas and Lewis Hamilton, who were unable to challenge in second and third.

An early safety car locked in the strategies of the leaders and led to a soporific race.

The prize for overhauling Racing Point - who started the race 10 points ahead but for whom Lance Stroll could finish only 10th as team-mate Sergio Perez retired early on - is in the region of $10m (£7.5m) of prize money.

Red Bull's Alexander Albon was fourth, 20 seconds behind team-mate Verstappen but close enough to the Mercedes to block any adventurous strategy choices, as the team weigh up whether to retain the British-Thai driver for 2021.

Too little, too late 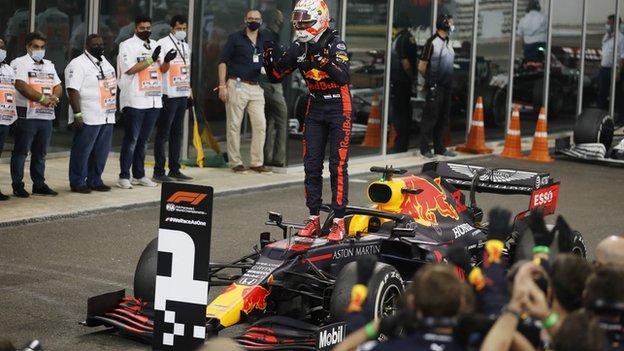 Verstappen put in the sort of performance Red Bull began the year promising but which they have spent failing to deliver in the face of Mercedes' overwhelming superiority.

Having taken a surprise pole position, the Dutchman retained the lead at the start and was in control throughout.

When Perez's Racing Point stopped in the final sector of the circuit after just 10 laps, the safety car was called and forced most teams to pit for fresh tyres and run to the end of the race.

That meant the rest of the race degenerated into a tyre-conservation cruise.

Bottas could not keep pace with Verstappen and slowly dropped back from the Red Bull.

Hamilton sat in the region of two to three seconds behind his team-mate for much of the race, apparently with more pace but either unable or unwilling to close in.

Hamilton also said he was struggling with fatigue in the race, as a result of the after-effects of contracting coronavirus, which forced him to miss last weekend's Sakhir Grand Prix in Bahrain. 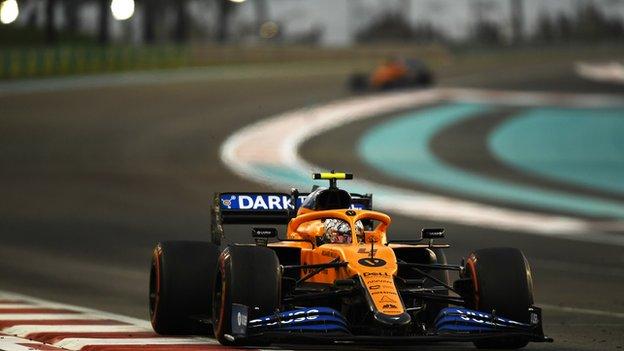 Albon had an anonymous race in fourth, while the year ended on a huge high for McLaren.

The Racing Point has been the faster car for much of the year, but McLaren and their drivers have maximised their potential to greater effect and stayed in the fight despite a strong second part of the season by their rivals.

That kept them in the fight and they delivered the race they needed when it mattered.

Norris made a good start and led Albon for the first few laps, before inevitably succumbing. He and Sainz then drove calmly and consistently for the rest of the race to secure the championship position they desired.

It made it a good day for McLaren on two fronts, after they confirmed a major cash boost from an investment by a US consortium that is to take a third of the equity in the team by the end of 2022.

Daniel Ricciardo ran a long first stint in his Renault on the hard tyre to convert an 11th place start into seventh at the end, ahead of Alpha Tauri's Pierre Gasly, as Renault's Esteban Ocon took ninth from Stroll on the last lap.