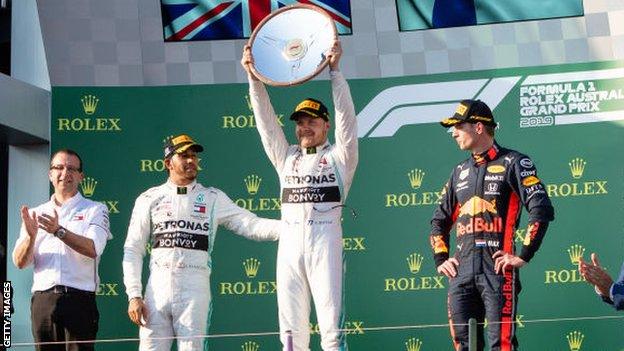 This year's Formula 1 season will have a delayed start after the Australian and Chinese Grands Prix were postponed because of Covid-19 restrictions.

The races were first and third on the 2021 calendar and the season is now scheduled to begin with the second race, in Bahrain, on 26-28 March.

Australia and China have strict rules on international arrivals.

A race at Imola in Italy has been added from 16-18 April and becomes the second race of the season.

"We are pleased to confirm that the number of races planned for the season remains unchanged," F1 president Stefano Domenicali said.

"The global pandemic has not yet allowed life to return to normal, but we showed in 2020 that we can race safely as the first international sport to return and we have the experience and plans in place to deliver on our season."

F1 says discussions over a new date for the Chinese Grand Prix, which was meant to be held from 9-11 April, are ongoing.

The third race of the season, scheduled for May 2, is yet to be confirmed but it is expected to be filled by Portugal's Portimao circuit following its debut last year.

The dates of the Brazil, Saudi Arabia and Abu Dhabi events have been moved to accommodate the postponed Australia race.

Brazil moves forward one week to 7 November, while the latter two have been pushed back a week to 5 and 12 December respectively.

Imola, a historic F1 venue which held a grand prix for 27 consecutive years from 1980, hosted its first race since 2006 in November last year.

"It is great news that we have already been able to agree a rescheduled date for the Australian Grand Prix in November and are continuing to work with our Chinese colleagues to find a solution to race there in 2021 if something changes," Domenicali added.

"Obviously, the virus situation remains fluid, but we have the experience from last season with all our partners and promoters to adapt accordingly and safely in 2021."

Valtteri Bottas won the last Australian Grand Prix in 2019, after the 2020 race was called off only hours before first practice was due to start when a McLaren team member tested positive for coronavirus.