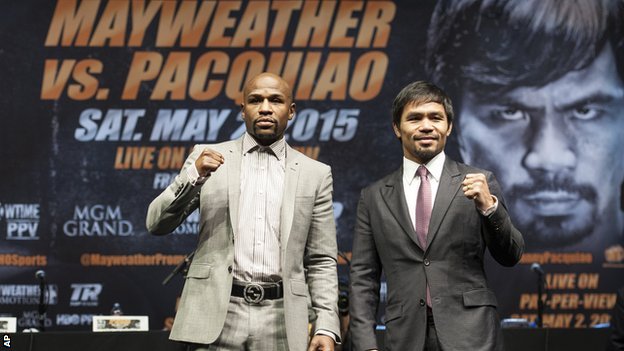 Floyd Mayweather and Manny Pacquiao's fight sold out within minutes and tickets immediately appeared on websites for as much as £94,000 ($141,000).

Only 1,000 tickets were made available to the public for the fight on 2 May at the MGM Grand in Las Vegas.

The remaining 15,500 seats will go to fighters, sponsors and promoters.

The contest between the two has been set since February, but a ticket contract was only finalised this week.

Tickets officially went on sale on Thursday at 20:00 BST on the MGM Grand's website and Ticketmaster.

But within minutes they appeared on sites such as StubHub - an online marketplace owned by eBay - with the cheapest priced at £3,511 ($5,270).

American Mayweather, 38, and Filipino Pacquiao, 36, are considered two of the best fighters of their generation and the bout, which has been in the pipeline for five years, is set to generate £162m ($250m).

Mayweather has won all 47 of his fights, 26 by knockout, while Pacquiao has a record of 57 wins, five losses and two draws.