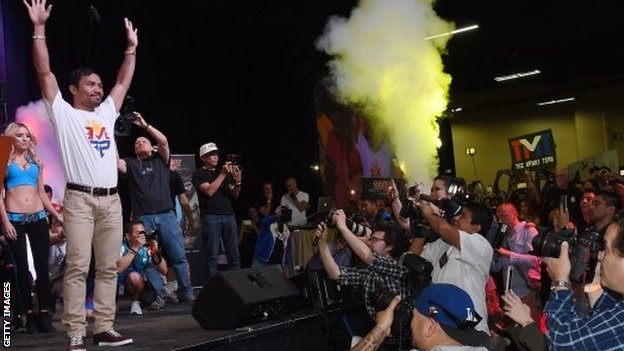 Floyd Mayweather and Manny Pacquiao were greeted by thousands of fans in Las Vegas as they arrived before Saturday's super-fight.

US legend Mayweather, 38, will meet Pacquiao, 36, for the WBC, WBA and WBO welterweight titles at the MGM Grand Arena.

It will be the richest fight in history, with the two protagonists set to split in the region of £150m.

Mayweather is favourite to successfully extend his unbeaten professional record.

But Filipino Pacquiao said: "Any time I am underdog, I like that.

"It means my killer instinct and focus is fully there. Other people are getting nervous for me but I am excited.

"This is the moment I believe he will experience his first loss."

Owing to promotional differences - Pacquiao is handled by the veteran Bob Arum, Mayweather by himself - Pacquiao snubbed the scheduled 'grand arrival' at the MGM Grand in favour of his own alternative.

A bizarre spectacle was staged at the Mandalay Bay Hotel for the benefit of Pacquiao's loyal supporters, many of whom have flown in from the Philippines especially for the fight.

The hour-long show cut between hip-hop and traditional Philippine singing and dancing, before Pacquiao took to the stage.

Afterwards, six-weight world champion Pacquiao seemed relaxed as he took photographs of his surroundings while being interviewed by the massed ranks of the world's media.

Meanwhile, a marching band and dancers greeted Mayweather's arrival at the MGM Grand, moments after his rival had addressed the crowd at the other venue.

Pacquiao's trainer, Freddie Roach, revealed that the Filipino had helped devise a strategy for a fight for the first time since they started working together 14 years ago.

"We have a very good game plan to win this fight," Roach told BBC Sport. "If a knockout comes, we'll be thrilled.

"At welterweight, Manny's really not that big a puncher. But his speed will overwhelm Floyd, that's what we're counting on.

"It will be very difficult for Floyd to win this fight just by running and at some point he will have to exchange.

"We've been working on throwing flurries of punches - because Floyd doesn't throw on the counter until you're done - before getting out of the pocket real quick.

"I've never seen Manny better than this, he's risen to the occasion. He knows the whole world is going to be watching and he knows he has to win this fight."

Meanwhile, Mexican great Juan Manuel Marquez, who has fought Pacquiao four times and was beaten by Mayweather in 2009, picked the latter to prevail.

"Pacquiao needs to pressurise Mayweather and land punches with speed, power and accuracy," said Marquez, who had lost twice against Pacquiao and drawn once before knocking him out in shocking fashion in 2012.

"But Mayweather uses distance very well, is hard to hit and lands with counter-punches. Mayweather wins because he's got such a difficult style."