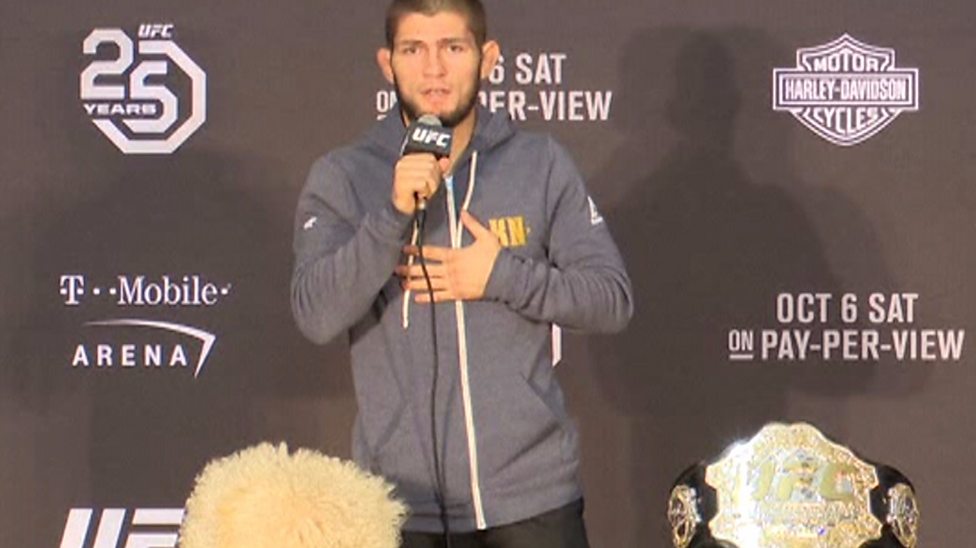 Khabib Nurmagomedov "has to be suspended" and stripped of his belt for the violent scenes after his win over Conor McGregor at UFC 229, according to former UFC title contender Dan Hardy.

Nurmagomedov leapt from the octagon and fought a member of McGregor's team, while the Irishman had a bust-up with some of the Russian's entourage.

"I don't see any other way around it," said Hardy.

"His actions almost led to a full scale arena riot."

Lightweight champion Nurmagomedov, from the Russian Republic of Dagestan, apologised following the incident but cited pre-match trash talk in which McGregor "talked about my religion, talked about my country, talked about father".

Hardy, speaking on BBC Radio 5 live's MMA Show podcast, said he thought the 30-year-old would be suspended for 12 months.

"Unfortunately, he is going to be suspended for a period of time, which means that the belt would probably be stripped from him," said Hardy. "Then we'll see [number one contender] Tony Ferguson face somebody else for the vacant title."

Hardy said UFC and the Nevada State Athletic Commission (NSCA), who sanctioned the fight, had some "big decisions to make right now".

The NSCA has already withheld Nurmagomedov's fight purse while it investigates the incident.

"He lost control, he completely lost control of his emotions," added Hardy. "It was scary at one point to look at the pockets of fighting going on all around the octagon.

"It was just pandemonium out there and obviously fans are starting to get upset and I saw a lot of fans running for the exit and things like that, too. It was just chaos." 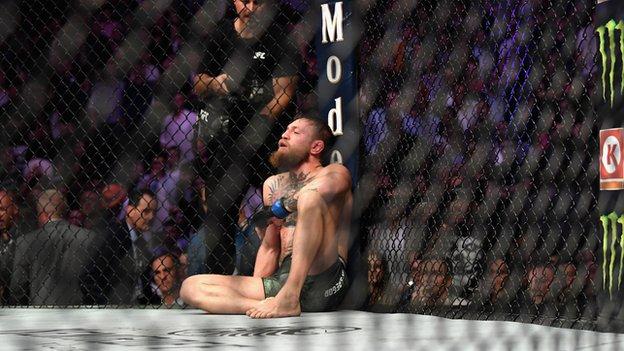 McGregor, who suffered his fourth defeat in 25 UFC bouts, tweeted afterwards that he was "looking forward to the rematch".

Speaking on the MMA Show, Peet said: "There's members of Khabib's team there that will never, ever be allowed anywhere near the UFC octagon again.

"Hopefully, we'll see him compete inside the UFC again. I think we will - but I don't think it will be any time soon.

"Conor's going to have to go through at least one other person before he gets the rematch against Khabib."

Peet thinks a rematch will eventually happen, but not in Las Vegas.

"Money talks in this game, it will happen," said Peet. "It will happen in America. Maybe not Las Vegas, but I'm sure New York would take it hands down.

"Controversy in fight sports goes hand in hand and has done for generations and we will get the rematch, eventually.

"But right now, looking at the fight alone - not the aftermath, the fight - it's hard to see Conor McGregor beating Khabib."

'Not my best side' - winner apologises

Three of Nurmagomedov 's party were arrested following the brawl but later released.

"I want to say sorry," said the Russian. "This is not my best side."

He also revealed Russian President Vladimir Putin had been in touch to congratulate him on his victory.

McGregor, 30, did not speak to the media following the event.

The melee created an ugly atmosphere inside the T-Mobile Arena, and Nurmagomedov was led from the octagon before his belt could be presented to him.

UFC chief Dana White later explained they feared more violence would break out in the 20,000-strong crowd if the presentation went ahead.

He added that the Nevada State Athletic Commission, which sanctioned the fight, was investigating the matter.

Why did Nurmagomedov lose it?

Bad blood between the two fighters was ramped up to promote the bout - so much so that it was expected to be the highest-grossing pay-per-view event in UFC history.

The rivalry intensified when McGregor was involved in an attack on a bus carrying Nurmagomedov and other UFC fighters in New York. The Irishman was later sentenced to five days of community service after admitting disorderly conduct.

In pre-fight news conferences, McGregor made personal insults and he had vowed there could be "no peace" between the two.

"So why do people talk about me jumping over the cage? Why do they talk about this? I don't understand. My father taught me you always have to be respectful. People who know me, they know who I am.

"This is a respect sport, not a trash-talking sport. I want to change this game. They talk about religion, about nation - you can't talk about this stuff. For me, it's very important."