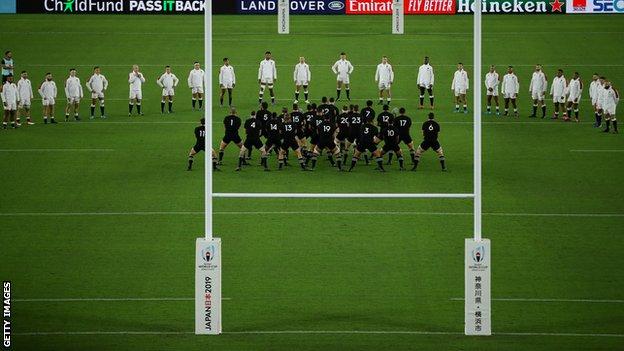 England have been fined a four-figure sum for crossing the halfway line as they lined up in a V formation to face the haka before their Rugby World Cup semi-final match against New Zealand.

World Rugby rules stipulate teams must remain within their own half of the pitch to receive the challenge.

Referee Nigel Owens and his team had to usher several England players back as they strayed over halfway.

England won the game 19-7 and will play South Africa in Saturday's final.

In 2011, France formed an arrowhead shape and advanced on New Zealand while they performed the haka before the World Cup final in Auckland and were subsequently fined £2,500 for breaching a "cultural ritual protocol".

England broke from the customary shoulder-to-shoulder stance and instead lined up in a V shape, with two prongs projecting towards the All Blacks, to receive the haka.

Captain Owen Farrell said England planned their response to show New Zealand they would not have things all their own way in their match.

"We didn't just want to stand in a flat line and let them come at us," said Farrell, who seemingly smiled during the haka.

Centre Manu Tuilagi added: "Everyone wanted to show that we were ready and together. It was something different that I think Eddie [Jones] suggested."

While New Zealand captain Kieran Read said England's haka reception had "no impact" on the match,

England's fine will be donated to charity.