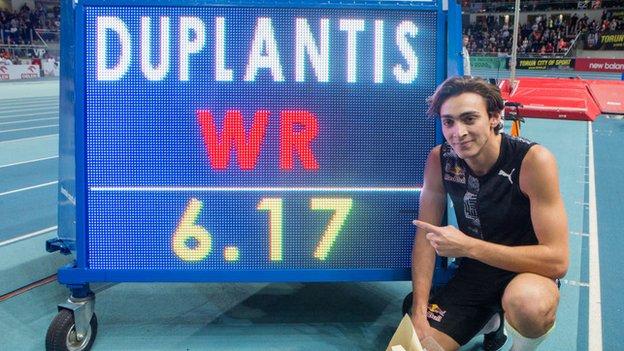 Armand Duplantis competes for his mother's homeland, Sweden, despite being born and raised in the US

"I don't blame them for wanting me to have a crazy career like Usain Bolt. I am going to try and carry the sport as much as I can and I know the best way to do that is to jump really high."

Having taken pole vaulting to new heights with a world record of 6.17m in Poland last weekend, Armand 'Mondo' Duplantis is addressing the question of whether he can be athletics' next Usain Bolt.

It's a big question - and on paper an even bigger ask for a 20-year-old athlete in his first year as a professional.

However, Duplantis is not your regular 20-year-old. As the son of a world-class pole vaulter (father Greg jumped 5.80m), Mondo has been pole vaulting since the age of three.

The Duplantis family home in Louisiana, USA, has had a pole vault set up in the back garden.

With two older brothers to chase after, Mondo hit the ground running. His world record in Poland last weekend came 13 years after his first - in the under-seven age category.

He holds the world's best mark at every age level from under-seven to under-12 and then from under-17 all the way to senior. But for a small blip - he says, "14, 15 16 - those were my little awkward ages. I was still short" - the Swedish vaulter would have a clean sweep.

"Mondo always tells me how easy pole vault is. He really was born to pole vault," is how mother Helena describes her son's talents. And she should know.

Helena, a Scandinavian age-group record holder in the heptathlon, is one part of Duplantis' dual coaching set-up alongside husband Greg.

Greg Duplantis competed in pole vault's golden era in the 1980s and 1990s when Sergey Bubka was breaking the world record for fun. Greg's best was 5.80m, a mark his youngest son surpassed when he was just 17 with a leap of 5.90m in April 2017.

Three years later, Mondo is in Glasgow before Saturday's Indoor Grand Prix and still coming to terms with adding 27 centimetres to that mark - and catapulting himself into the role of Bolt's heir apparent

"The position I am in, I never really imagined, people talking to me about leading the whole sport of track and field? I am just a pole vaulter, it is such a strange and unique event," says Mondo - who despite being born and raised in America chose to compete for his mother's homeland Sweden.

"I love all the attention it is getting because I love pole vaulting. To put pole vaulting on the map just for a second is a dream come true. The best way to continue to do that is to jump really high.

"But as far as carrying the sport I can't say too much about that - I've got too many opponents to worry about."

Heading that list is Sam Kendricks - the American who took gold ahead of Duplantis' silver at the World Championships in Doha last year.

While Duplantis was confidently holding court with the world's press to preview in Glasgow, Kendricks was quietly scoping out the Emirates Arena on his own in the background.

The world champion all of a sudden reduced to a supporting role. 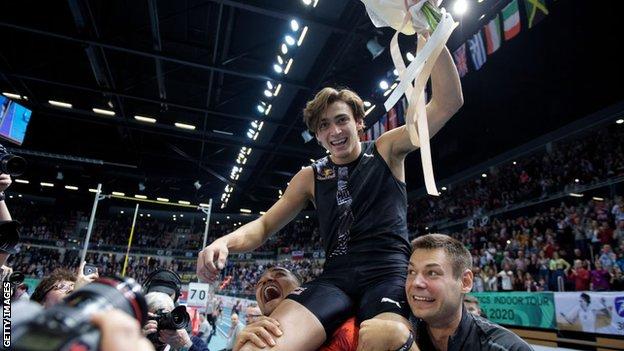 Armand is the son of world-class pole vaulter Greg Duplantis

Does Kendricks think Mondomania will go to his head? "I don't think it'll change him - he's got two older brothers, nothing like this will change him," he says.

"Imagine you were taking a test and it decides whether you are going to get into college or not. Most people would be really focused but Mondo is confident enough to know, 'I've studied for this test for a long time, this test is in my blood'."

Speed is one of Mondo's biggest weapons. The 20-year-old has run 10.57 seconds (albeit wind-assisted) for the 100m and believes he is in the shape now to perhaps run 10.4 seconds.

That confidence - and increased turn of pace - has its origins in Duplantis' decision to ditch a college party lifestyle to turn professional this year.

By his own admission spending last year studying at Louisiana State University left Duplantis with a "fat college kid" physique.

However, with the help of his mother, a dietician, Duplantis has made - and profited hugely from - a few small changes. Gone, mostly, is the fried food he so loved ("I'm from Louisiana, it's pretty tough not to"). In its place? A new concept. Vegetables.

"Mondo has never really enjoyed vegetables," Helena says. "He would just move them to the side of the plate. We're taking it one vegetable at a time."

Bubka's modus operandi was to break the record in one centimetre increments. 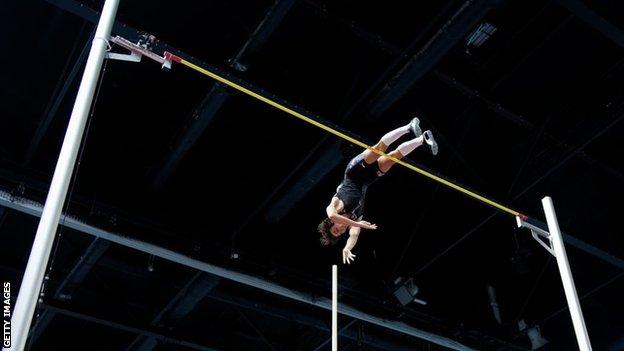 "I love all the attention it is getting because I love pole vaulting," says Duplantis

The Ukrainian broke it 35 times (17 outdoor and 18 indoor) during an incredible career that saw him win one Olympic and six world titles. When he eventually bowed out he had increased the record to 6.14m - a mark France's Renaud Lavillenie then extended to 6.16m.

"Bubka blew it for me," Duplantis jokes now. "If the world record had been at say six metres 10 centimetres then I could have broken it seven times now."

He may yet still do so.

"When I was in the stadium and watching him I thought, this is scary," Helena adds. "It just didn't seem that difficult to him. I don't know whether I should say this but with Bubka I don't know if it looked that easy."

Easy or not, the difficult question now is whether Duplantis can go higher.

"With Mondo people see how quickly he did it, and how young he did it and the only question they can think of is "when will he do it again?" Kendricks says.

"When you expect that of someone, you ruin them. Not to say it will ruin Mondo because he is bigger than the pressure. But there is so much more to achieve in the sport than the world record."

Duplantis knows - and accepts that - in Tokyo it will be tough to accept anything other than the gold medal - "especially now".

But what of that other burning question. Can he go higher?

"I have been asked it so many times in the last week. It's the only thing I am asked now but I guess it makes sense, you break the world record they just want to know when the next one is going to be."

So when will that be? More smiles.