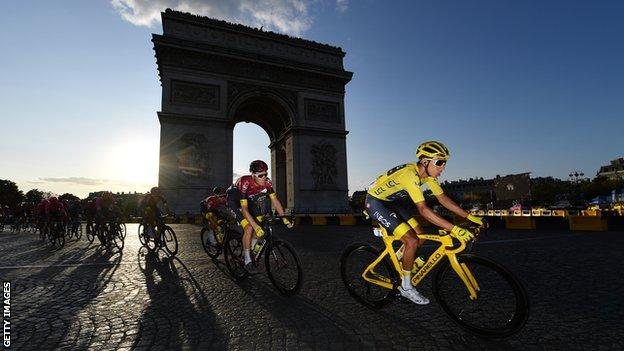 The postponed 2020 Tour de France will now start on 29 August, following the French government's extension of a ban on mass gatherings to mid-July because of the coronavirus pandemic.

"Holding this event in the best conditions possible is judged essential given its central place in cycling's economy," said the UCI, the sport's governing body.

Many large-scale sporting events scheduled to take place this summer have either been called off, such as Wimbledon, or pushed back by a year, such as football's European Championship and the summer Olympics.

Four-time winner Chris Froome is set to return at this year's Tour, which is set to start in Nice, after he missed the 2019 race following a high-speed accident in which he broke his neck, femur, elbow, hip and ribs.

He tweeted: "The news many of us have been waiting for. Some light at the end of the tunnel." 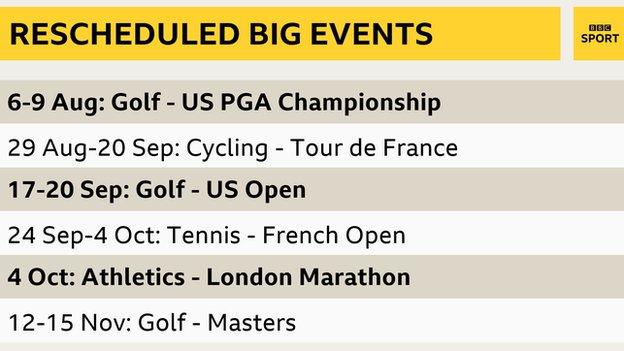 Geraint Thomas, the Briton who won the Tour de France in 2018, told BBC Radio 5 Live: "Hopefully those dates can go ahead. I'm super excited about that.

"The Tour is the pinnacle of the sport. If you ask anyone in the UK for three words to do with cycling, they would be: Tour de France. It would be great for the riders and the teams if it can go ahead. This is why teams exist and that's why sponsorship comes into the sport."

He added: "The calendar needs to be ironed out. Once we know that we can get back racing again then talks can get under way between everyone. The Tour has to take priority. That's the main event in cycling and then hopefully we can fit other races in around it."

Cycling's two other three-week Grand Tour races have also been rescheduled for later this year, as part of a plan by the UCI to stage all major cycling races this season.

The Giro d'Italia - which was scheduled to take place in May - and the Vuelta a Espana, originally set for September, will now be raced after September's World Championships.

The championships, which will be held in Switzerland, remain in their 20-27 September slot, which means the Tour de France will finish on the same day the week-long championships begin.

That means the men's World Championship road race will take place one week after the final day of the Tour.

The postponed 'monument' one-day races - Milan-San Remo, Liege-Bastonge-Liege, Tour of Flanders and Paris-Roubaix - "will all take place this season, at dates still to be defined", added the statement.

The UCI cautioned that the calendar will remain dependant on the "world health situation", with the body's president David Lappartient saying "we still have work to do to finalise the establishment of an entirely revised calendar".

On 10 April, the UCI furloughed staff and cut the salaries of senior employees as a result of the coronavirus pandemic.

The women's version of the Tour, La Course by le Tour de France, was initially scheduled to take place over one day on 19 July on the Champs Elysees in Paris.

But Tour organiser ASO said it will also be postponed and instead take place "during the Tour de France 2020".