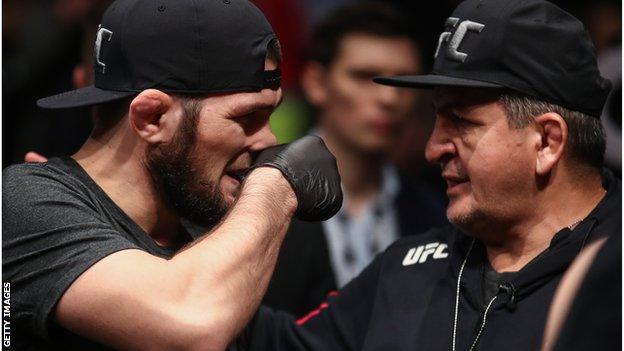 Khabib Nurmagomedov with his father and coach Abdulmanap

Abdulmanap, an MMA coach, was taken to hospital in Moscow in May, after coronavirus symptoms exacerbated an existing heart condition.

The news of his death was confirmed by Khabib's manager, Ali Abdelaziz, on Twitter on Friday.

Khabib is unbeaten in 28 bouts, beating Ireland's Conor McGregor in 2018.

In May, McGregor said he was "praying for the recovery" of Abdulmanap after learning of his critical condition.

Having been treated initially in his native Dagestan, army veteran Abdulmanap was flown to a military hospital in Moscow when his condition worsened.

Abdulmanap was in his son's corner last September when Khabib successfully defended his lightweight title against Dustin Poirier.