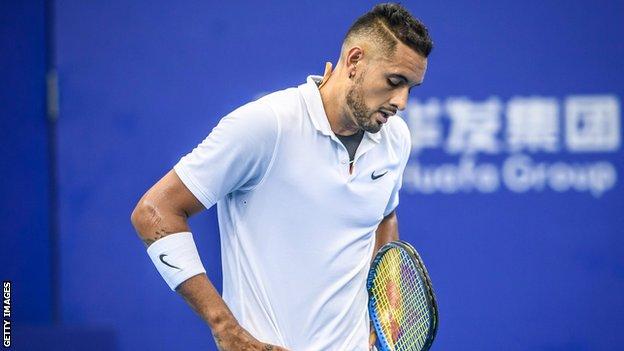 Nick Kyrgios has received a suspended 16-week ban and $25,000 (£20,300) fine for "aggravated behaviour", subject to a six-month probationary period.

The Australian smashed two racquets in a bad-tempered Cincinnati Masters defeat by Karen Khachanov in August.

However an ATP investigation determined Kyrgios' "pattern of behaviour" over the past 12 months to be in violation of the governing body's code.

Both fine and suspension will be triggered if the 24-year-old does not comply with certain conditions - including avoiding any further code violations incurring a fine.

"Everyone, I can still play," wrote Kyrgios on social media. "I'm just on probation.

"I just have to keep a lid on my behaviour, that's all."

At the end of August Kyrgios was warned by umpire James Keothavong for his conduct during his US Open first-round match, and later, when asked about his fine in Cincinnati, claimed the ATP was corrupt .

He then clarified those comments, adding it was "not the correct choice of words" - although he believed the ATP was guilty of "double standards".

A second investigation into those comments, allowing for Kyrgios' clarification, found no violation had occurred.

In May, he was fined after he kicked a bottle, threw down his racquet and hurled a chair before defaulting in the final set of a match at the Italian Open.

A month later, he was fined £13,766 for unsportsmanlike behaviour at Queen's.

He previously received an eight-week ban for his behaviour at the Shanghai Masters when his level of effort during a defeat by Mischa Zverev was questioned.

With Thursday's decision, any further verbal or physical abuse, unsportsmanlike conduct or any visible obscenity directed towards an official at an ATP Tour or ATP Challenger Tour event will result in a ban.

He has been given five working days to lodge an appeal.