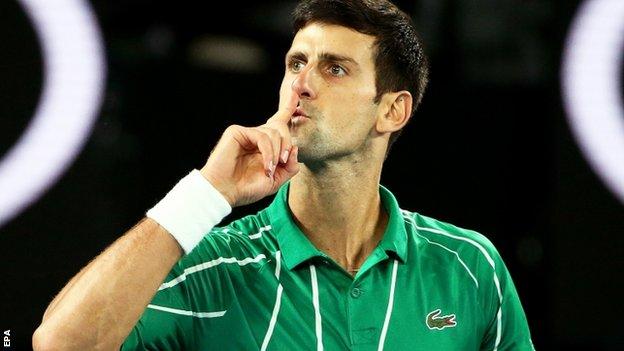 Novak Djokovic defended his Australian Open crown and won a 17th Grand Slam after digging deep into his physical and mental reserves to beat Dominic Thiem in a gripping five-set final.

Djokovic, 32, twice called the doctor while trailing before fighting back.

Djokovic, who fluctuated from steely brilliance to being emotionally erratic and back again, took the first of two championship points when Thiem pulled a forehand wide.

With Thiem getting plenty of support throughout in the Rod Laver Arena, Djokovic celebrated by putting a finger to his lip to shush some of the crowd, then breaking out in a grin before pointing to his box

Djokovic, who said he had been "on the brink of losing" when dehydration affected his energy levels, solemnly watched as he was lauded as the 'King of Melbourne' before being presented with his trophy.

He then gave an emotional winning speech where he talked about the "devastating" Australian bushfires, world conflicts and the death of American basketball great, and his "mentor", Kobe Bryant.

"I would like to say this is a reminder that we should stick together more than ever," Djokovic told the 15,000 crowd.

"Stay close to the people who love you. There are more important things in life."

His latest triumph moves him within three of Swiss Roger Federer's all-time leading tally of 20 men's singles titles, and only two behind Spain's Rafael Nadal, who is on 19.

The Serb's fightback ensured the wait continues for somebody to break the stranglehold of the old guard, with Djokovic, Nadal and Federer having won the past 13 Grand Slam titles.

No other player has won a men's major title since Switzerland's Stan Wawrinka won the US Open title in September 2016.

Djokovic will also return to the top of the world rankings, replacing Nadal, when they are published on Monday. 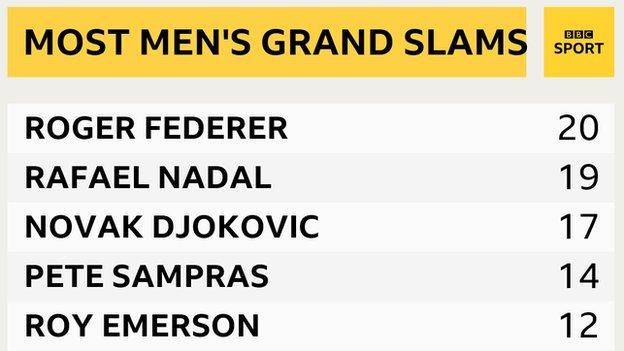 After an opening Grand Slam of the 2020 season which had pretty much everything, it was fitting that the tournament finished with another thrilling match.

Starting negatively amid a backdrop of devastating bushfires across Australia and players complaining about poor air quality, the mood was lifted across the fortnight by shock wins, incredible fightbacks and another star emerging in the women's game.

When 21-year-old American Sofia Kenin beat Spain's Garbine Muguruza on Saturday she became the eighth woman to win their first Grand Slam in the past 12 majors.

Thiem, having been a fixture in the top 10 for a number of years and winning 16 ATP titles, is far from being a new kid on the block.

But such has been the dominance of the 'Big Three', the Austrian remains a relative novice in the biggest finals as the younger players struggle to end their supremacy at the Slams.

Djokovic is the first man to win a Grand Slam title in three different decades since the Open era began in 1968.

Now the task of the younger generation is to stop Nadal and Federer doing the same. 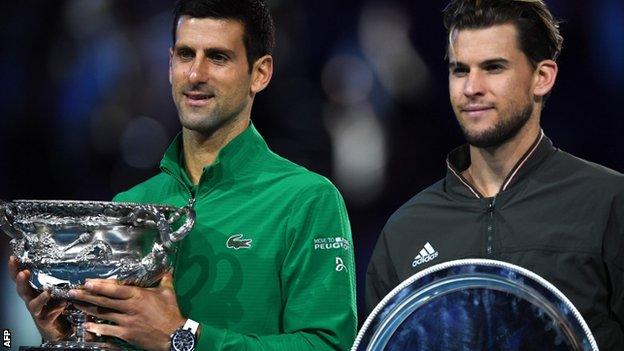 Thiem has long been considered one of the younger players most likely to end the dominance of Djokovic, Federer and Nadal, although many expected that to come on his favoured clay surface at the French Open, where he has lost the past two finals to Nadal.

His game - based on crushing groundstrokes and athleticism - always had the potential to be successful on hard courts, and winning his biggest title on the surface at Indian Wells last March appeared to give him added belief.

With the men's semi-finals split across Thursday and Friday, Thiem had 24 hours less to recover than Djokovic and had spent almost six hours more on court over the fortnight.

That did not look to be a major factor, however, when Thiem moved one set away from finally getting his hands on a Grand Slam trophy at the third attempt.

Perhaps, ultimately, there was an element of fatigue - mental as well as physical - as Djokovic dug deep and Thiem hit 16 unforced errors in the fifth set.

Nevertheless, it appears only a matter of time before Thiem becomes only the second Austrian - after 1995 French Open champion Thomas Muster - to win a major singles title.

"You were very close to winning it and you definitely have a lot more time in your career. I am sure you will get a Grand Slam trophy, more than one," Djokovic told him. 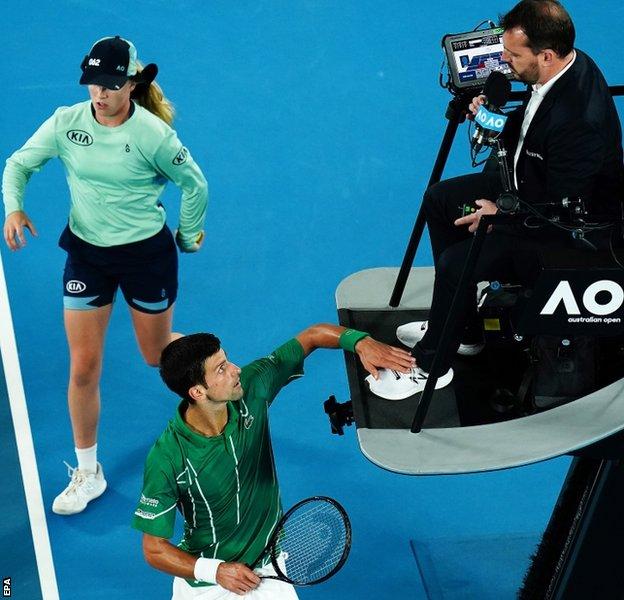 Djokovic had eased through the draw with the concession of just one set, with a dominant service game that opponents had rarely broken.

He had raced to a 3-0 lead after a high-quality start but was then unable to sustain that level, mainly down to physical issues that flared up in the second set and continued through the third.

Djokovic disappeared off court at the end of the each set, also requiring a chat with the doctor on two separate occasions.

"I was hydrated well and everything. Apparently the doctor said I wasn't hydrated enough," Djokovic said.

"After I lost the second set, I start to feel really bad on the court. My energy dropped significantly."

With the Serb constantly looking at the floor between points, walking wearily and mopping his brow, it was not a surprise that Thiem won six of seven games on the way to a two-sets-to-one lead.

Djokovic was also angered at a crucial juncture of the second set when he was docked a first serve for twice taking longer than the 25 seconds allowed to serve.

The Serb looked furious with the decision as Thiem punished the second serve to break for 5-4, sarcastically congratulating umpire Damien Dumusois and tapping his foot when he passed the chair at the changeover.

"Great job, you made yourself famous," he told the Frenchman.