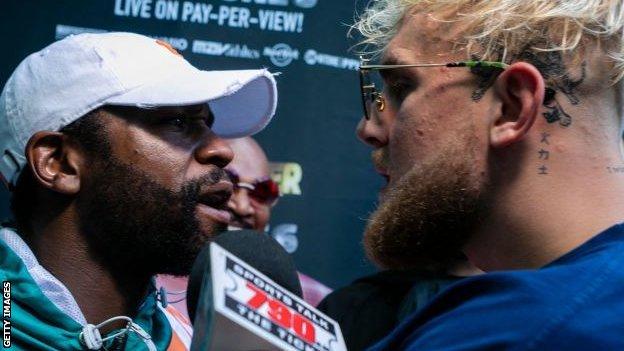 Former five-weight world champion Floyd Mayweather was involved in a brawl with Jake Paul during an event promoting his exhibition bout with the YouTube star's brother.

Mayweather, 44, was due to pose for photographs in Miami for his 6 June exhibition fight with Logan Paul.

But when Jake Paul stole Mayweather's hat after they exchanged words, a melee involving several parties broke out.

Jake Paul later claimed one of Mayweather's staff punched him.

"One of Floyd's 30 bodyguards got a clean shot on me in the eye," tweeted Jake Paul, who has had three boxing matches of his own in recent months.

"Honestly I have had three easy fights as a pro so I've been itching for some real action.

"I stole his hat because he steals people's money with boring fights."

Jake Paul had posted a video on Twitter where he claimed he was "about to steal Floyd Mayweather's hat".

Social media footage of the aftermath shows countless individuals grappling and it is not clear as to whether punches were thrown or landed.

Mayweather launched an expletive-laden tirade during the incident and afterwards, when his publicist was seen telling him to get into a locker room.

Insults had already been traded in an earlier confrontation, with Logan Paul taunting Mayweather by referencing his 2011 domestic violence case.

Mayweather served two months of a three-month sentence after attacking an ex-girlfriend.

Before the brawl, Logan Paul told AFP he firmly believed he could do what no boxer had ever done before and beat Mayweather, who last competed in a sanctioned bout in 2017 and retired with 50 wins from 50 professional fights.

"After this fight I don't want anyone to tell me something is impossible," Paul said.

"I am representing the guy who was counted out, the guy who believed in himself so much that his unrelenting belief in himself propelled him to success. That's me.

Logan Paul first ventured into white-collar boxing in a bout he lost against British YouTuber KSI in 2018 and he has not fought since.